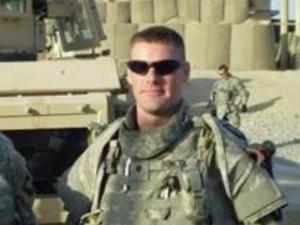 Zebulon, N.C. — Sunday was a special Easter for a Triangle veteran who was able to make it to his home church in Zebulon in time for services while walking across North Carolina to raise awareness about suicide rates among veterans.

Mike Boncek has completed many missions as a former Army sergeant serving two tours in Iraq, and now he is on a mission of his own. He’s walking 2,200 miles across North Carolina to bring attention to the statistic that 22 veterans commit suicide each day.

“We’ve gotten down roughly 320 miles,” Boncek said. “We thought we’d make it through and got lucky and make it here on Easter.”

Boncek started his walk on March 5 in the Outer Banks and will finish sometime in August.

On Sunday, Boncek sat at the altar of Tabernacle Baptist Church in Zebulon with his wife, Wendy. It’s where they were married four years ago and where he will camp out for the night before hitting the road again Monday morning. The church is also where his wife brought him when he returned home, broken and scared, from his second tour of duty in 2008.

Boncek said that’s when God encouraged him to seek help and help others.

“If I can save one soul or help one person come to the Lord, then all of this pain, this tribulation is for not. I’ve done my part,” he said.

Boncek’s walk isn’t easy. He has a dislocated shoulder, joint issues, and a traumatic brain injury from his service. He, like many veterans, also suffers from post-traumatic stress disorder.

Boncek and his wife hope his journey will show other veterans that they are not alone and that it is okay to ask for help.

“It seems to be a taboo topic and it doesn’t need to be,” he said. “As a community, we need to be talking to our soldiers.”

Boncek said that he wasn’t scared to ask for help, but skeptical because men are groomed to be tough.

“We are battling that stigmatism that’s in society that you are a weaker person if you ask for help. You’re a man, you’re a soldier, you’re supposed to push through this,” Wendy Boncek said. “They’ve seen some bad stuff, some really bad stuff. When you’re in it, you don’t get to process those feelings. You have to push them back so when you get home, you have to deal with those feelings.”

Boncek is also raising money to support the Nine Line Foundation, a nonprofit that helps wounded veterans receive the care and housing they need.

,Mike Boncek has completed many missions as a former Army sergeant serving two tours in Iraq, and now he is on a mission of his own. He’s walking 2,200 miles across North Carolina to bring attention to the statistic that 22 veterans commit suicide each day.