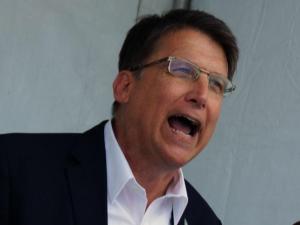 So he sent an email to reporters and distributed a similar fact sheet on social media. Then he had just about every one of his state agencies do the same over the Easter holiday. And the same email went to most, if not all, state workers and some in county agencies.

“I’ve got to do it, especially with your editorial pages, which are definitely misleading the public on many items. I’m proud of us protecting the privacy rights of individuals and not putting burdensome regulations on business and letting them make the decision, not government make the decision,” McCrory said when asked about the full-court blitz his administration deployed over the weekend.

There are differences of opinion about its aims. Supporters say it will protect women and children from having to use the same bathrooms and locker rooms as men with bad intentions. Opponents say the law will force transgender people to use a bathroom that doesn’t correspond with how they present themselves.

More broadly, attorneys don’t agree on some of the ramifications of the law with regard to employment, housing and other areas of law. On its face, the measure establishes statewide discrimination protections. But in practice, it prohibits cities and counties from extending protections to gay and lesbian people as well as transgender people. On Monday, a group of plaintiffs stepped forward to sue in federal court in order to derail the law.

McCrory’s weekend response was notable to many state employees and long-time state government watchers, who say it speaks to the pressure – both practical and political – the governor is facing.

“That’s certainly a non-traditional response,” said Joseph Cabosky, an assistant professor at UNC’s School of Media and Journalism, whose work focuses on public relations and politics.

He said the document’s headline, which calls out the New York Times and Huffington Post, is meant to telegraph to supporters that the governor is under attack from a liberal media.

“The headline speaks to certain media outlets and conservative voters,” he said. And the fact the document was pushed out over social media, Cabosky said, suggests he is hoping supporters will use it to refute those posting in opposition to the law.

Others suggest that McCrory’s full-court press approach suggests he was worried about how the law, and the fact the governor signed it within hours of passage, will be perceived.

Whatever pressure was already on McCrory after the bill had passed continued to build Monday. The High Point Furniture Market Authority, a group that manages a massive, twice-annual trade show in the Triad, put out a statement that customers were cancelling their plans to attend. At the same time, local political leaders like Raleigh Mayor Nancy McFarlane raised questions about House Bill 2, as did President Barack Obama’s press secretary.

“Like so many others across the country, we are concerned about the potential harmful impact of this law, especially on transgender youth, and believe it is mean-spirited and sends the wrong message,” White House Press Secretary Josh Earnest said in a statement reported by several media outlets.

And in Georgia Monday, Gov. Nathan Deal, a Republican like McCrory, announced he would veto a proposed “religious liberty” bill there. That measure would have given faith-based services the right to turn away gay, lesbian and transgender people for services.

McCrory said the two measures were nothing alike.

“I think the media is connecting the two when there’s actually no connection whatsoever. They’re two different issues, totally,” McCrory said. “I know you’re trying to connect them, but there is no connection between the two.”

,Gov. Pat McCrory says it is the media, not his administration, that has gotten the facts around House Bill 2 wrong. He launched an unusual campaign to counter the criticism over the weekend.