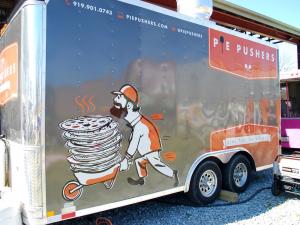 Raleigh, N.C. — Pie Pushers is not fooling around for its 5th birthday. They will celebrate Friday at The Pinhook in Durham. The event will start at 8 p.m. and will feature live music from Loamlands, The Future Kings of Nowhere, Blanko Basnet and DJ Kenny Login. American Meltdown will be there to feed party-goers and Monuts is providing a donut birthday cake.

Located in downtown Cary, Bond Brothers is kicking off its recent opening with a festival on Saturday. The event will kick off at 2 p.m. and include live music from Chatham County Line and Diamond Creek. Food trucks Chirba Chriba, CJ’s Street Food, Heavy Metal Grillers, The Humble Pig, Pie Pushers and Sweet Traditions will also be there. If that isn’t enough, Bond Brothers will be releasing collaborative beers and new beers.

The Triangle-area’s NASL soccer team kicks off the regular season at home with an in-stadium food truck rodeo. The rodeo is part of the pre-game festivities, which will include live music, fly-overs, pyrotechnics and a skydiver delivering the game ball. The game against Minnesota United FC kicks off at 3 p.m. The club is also celebrating its 10th anniversary this year.

GOUGE will celebrate its 10th anniversary on Saturday with the “10 Years of Bodyslams and Beer” event at Draft Line Brewing in Fuquay-Varina. The event kicks off at 5 p.m.and will have food trucks Flattz and Manna on hand. After the wrestling, there will be live music from Your Mama’s New Boyfriend.

Ever wanted to be first in line for your favorite food trucks? The Downtown Raleigh Food Truck Rodeo has announced its dates for this year: May 1, June 12, Aug. 7 and Oct. 9. VIP early admission wristbands, which let you get in to buy food before the general public, are on sale now.​

,Get the scoop on the latest Triangle food truck news.