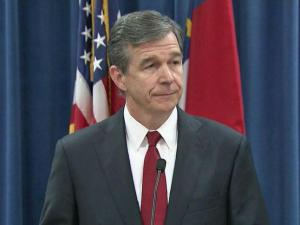 “This new law provides for broad-based discrimination,” he said. “Obviously, the LGBT community is targeted.”

Cooper pointed out that the law, known as House Bill 2 (or HB2), is at odds with specific employment policies of his office and the state Treasurer’s Office which allow protections for workers based on marital status or sexual orientation.

“In order to protect our non-discrimination policy and employees, along with those of our client, the State Treasurer’s Office, part of our argument will be that HB2 is unconstitutional,” Cooper said.

“The state’s policy is narrow,” he said. “It doesn’t protect enough people.”

Cooper suggested that the defendants named in a challenge to the law Monday – the University of North Carolina, the university’s Board of Governors and McCrory – could retain outside counsel rather than have the Attorney General’s Office handle their case.

In response, Sen. Phil Berger (R-Rockingham) called Cooper’s refusal to defend the law politically motivated and called on him to resign.

“His zeal for pandering for the extreme left’s money and agenda in his race for governor is making it impossible for him to fulfill his duties as attorney general – and he should resign immediately,” Berger said in a statement.

Cooper touched on two other elements of the arguments made by opponents of the law – the economic impact on the state and the claim that it would impose additional burdens on other protected classes of people.

“Other people who are discriminated against based on race, religion and other classes of people, could have a harder time bringing actions to protect themselves,” he said.

Supporters of the law have said that argument is a red herring. A Q&A about the law released by the governor’s office notes that North Carolina law specifically prohibits bullying and harassing behavior against children on the basis of sexual identity and bans discrimination based on disability.

“While the discussion around the law has centered on bathrooms, it could end up limiting the options of North Carolinians who face other kinds of discrimination as well,” Tom Spiggle, an employment lawyer based in Arlington, Va., told WRAL News.

Cooper predicted the law will cost North Carolina “millions of dollars. We could lose jobs,” he said, pointing to statements by businesses like Apple and American Airlines and worries that convention and major sports organizers will look elsewhere for their events.

“It will set North Carolina’s economy back if we don’t repeal it. The threats to our economy will grow even darker the longer this law stays in effect,” Cooper said.

North Carolina Values Coalition responded by releasing a list of 334 signers of a petition in support of HB2. “Hundreds of North Carolina business owners have signed on to a letter thanking Governor Pat McCrory and the General Assembly for passing a law affirming the privacy and safety of businesses, women, and children,” the organization said in a statement.

Cooper contrasted North Carolina’s law and McCrory’s support for it with recent moves by governors in Georgia and Indiana where proposed “religious freedom” laws that would have allowed businesses to refuse service based on their beliefs have been scaled back or scrapped.

Those governors, according to Cooper, “knew that businesses were potentially pulling conventions and sporting events and jobs and investments and our governor is continuing to defend this law with arguments that don’t hold water.”

McCrory, who has characterized the North Carolina law as one to protect the privacy of public bathrooms, said Monday that he sees no connection between that law and “religious freedom” bids in other states.

,Calling North Carolina’s new anti-discrimination measure “a national embarrassment,” Attorney General Roy Cooper, the Democratic nominee for governor and challenger to incumbent Republican Pat McCrory, said Tuesday that his office would not defend the law in any court challenge.