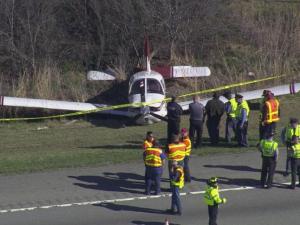 Raleigh, N.C. — No injuries were reported Tuesday morning when a single-engine airplane made what authorities called a “textbook” emergency landing on Interstate 540 near Leesville Road in north Raleigh.

According to radio traffic between Raleigh-Durham International Airport and the pilot, the plane had no oil pressure shortly after taking off from RDU at about 8:51 a.m.

Just before 9 a.m., commuters on westbound I-540 saw the plane land off the shoulder of the highway.

The pilot was not hurt, according to RDU. The plane is a 1975 Piper Arrow, a single-engine plane registered to William Woody, of Raleigh.

Eric Curry, with Wake County’s emergency management department, said the pilot was sitting on the wing of the plane when emergency responders arrived at the scene.

“According to the firemen, they credit the pilot for making such a difficult landing without causing any harm or injuries,” Curry said. “This was a textbook landing.”

It’s unclear if the plane landed on the highway first and then slid onto the shoulder. Authorities said there were no fuel leaks following the incident.

Authorities shut down the westbound lanes of I-540 following the incident. The highway was cleared at about 2:15 p.m.

Raleigh-Durham International Airport officials tweeted about the incident, saying that local law enforcement agencies were assisting with the investigation. Air traffic at the airport, which is in Morrisville, was not affected.

Map of the #RDUIncident. Pilot departed RDU to the northeast. Originally cleared back to Rwy 32, then any runway. pic.twitter.com/Ecj0v30fao

Andrew Sawyer, a spokesman for RDU, said airport emergency responded to the scene to assist local law enforcement agencies. He said the Federal Aviation Administration would investigate the cause of the plane’s problems and then remove the plane from the shoulder of I-540.

Sawyer said that could happen as early as Tuesday afternoon.

“The aircraft will be removed and take back to the airport,” he said.

,No injuries were reported Tuesday morning when a single-engine airplane made what authorities called a “textbook” emergency landing on Interstate 540 near Leesville Road in north Raleigh.