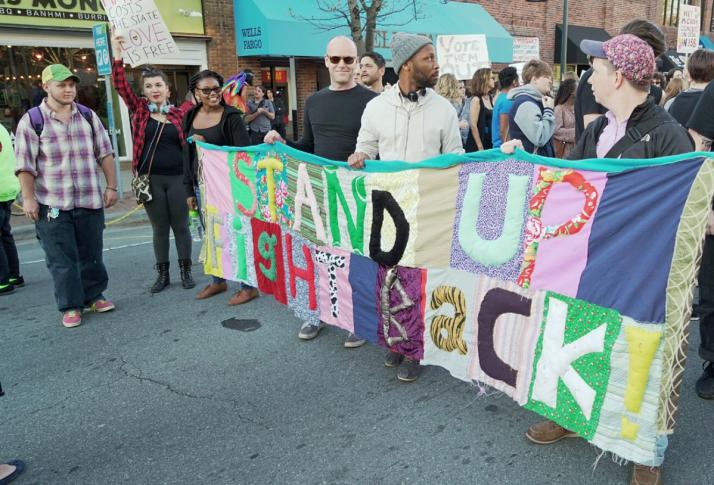 With signs, banners and the power of their numbers and voices, thousands walked onto Franklin Street near the University of North Carolina at Chapel Hill campus in protest of House Bill 2.

“We are fed up and we are not going to take it anymore,” said protester Maveryk Tell.

The crowd made their way to Columbia Street, where they formed a circle. People took turns telling their stories over a microphone. Tell was among those who spoke out,

“We have been marginalized and pushed to the sides of society,” he said.

Experiencing some delays due to protest march in downtown #ChapelHill, will return to regular schedules as possible. pic.twitter.com/NyABrSyIaD

House Bill 2 was approved last week and designed to overturn Charlotte’s nondiscrimination ordinance. While those who support the bill say it promotes safety in bathrooms and locker rooms, people in the crowd that gathered Tuesday night said it discriminates against the LGBTQ community.

Many said the passage of the legislation was hurtful, but Nazario said the reaction to the bill has changed that.

“Despite the bill that passed and despite all the people who seem to be against us, there are so many people that are for us and it fills my heart with so much joy to see that,” she said.

“The reason we are seeing protests like the one held today at UNC Chapel Hill is because leftists across North Carolina, spurred on by the likes of Roy Cooper and Mayor Pan Hemminger, have purposefully spread misinformation regarding House Bill 2,” the statement said. “The fact of the matter is that all House Bill 2 does is protect women and children across North Carolina from predators invading their privacy and establish statewide non-discrimination policies to protect all North Carolinians.

The protest wrapped up just after 9:30 p.m. There was no information immediately available about whether any arrests were made during the event.