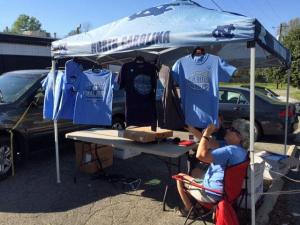 Chapel Hill, N.C. — The energy at the University of North Carolina at Chapel Hill has been building for weeks. As the men’s basketball team claimed first the ACC regular season and tournament titles, and as they made their way through the NCAA Tournament’s annual March Madness. It reaches a peak this weekend at the Final Four in Houston, and fans can turn out Wednesday evening to see the team off.

For those who can’t afford the $3,000 round-trip package offered by the Ram’s Club (not including a game ticket), there are two options to cheer for the team at home in Chapel Hill.

On Thursday, the Tar Heels sendoff celebration will take place outside Entrance D of the Dean E. Smith Center at 6:30 p.m.

On Saturday, fans can watch the game from the Smith Center. Doors open for students, faculty and staff at 5 p.m., and the general public will be admitted beginning at 5:30 p.m.

Both semifinal games – Villanova versus Oklahoma and North Carolina versus Syracuse starting at about 9:40 p.m., will be shown on a projection screen and video boards throughout the arena.

,March Madness reaches a peak this weekend at the Final Four in Houston, and fans can turn out Wednesday evening to see the team off.