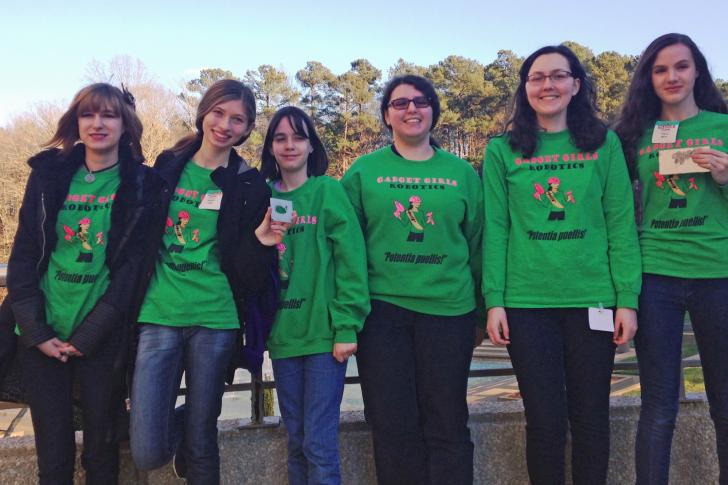 Raleigh, N.C. — The Gadget Girls, the only all-girl robotics team in Wake County, is on its way to Campbell University this week in hopes of qualifying for the NC State FIRST Robotics competition.

The team of six Girl Scouts, all in high school, have been working since January to conceptualize, design, build and program their robot, which is adorned appropriately with Girl Scout cookie boxes for this year’s competition.

When The Gadget Girls first entered the competition, they, along with other teams, received a kit of common parts that were used to build the core systems of the robot. Everything else was left up to their imaginations.

To accompany their robot, The Gadget Girls also created a team T-shirt with a “cookie robot” and team logo and wore hot pink hard hats to the Wake County competition that was held earlier this month at Southeast Raleigh Magnet High School. At this competition, the budding engineers were presented with the 2016 Imagery Award at the FIRST North Carolina District.

This week, they’ll travel to to the FIRST Robotics competition in Johnston County in hopes of qualifying for the state-wide competition, held April 9-10, 2016 on the campus of UNC-Charlotte.

At the competitions, the girls will subject their robot to a medieval castle-themed game played by two alliances of three robots each. In the game, alliances are on a quest to weaken opponents’ towers with boulders and capture the opposing team.

“Creating opportunities for girls to explore science, technology, engineering and math, and exposing girls to role models in these fields are essentials pieces of the Girl Scout Leadership Experience,” said Lisa Jones, the CEO of the Girl Scouts of North Carolina Coastal Pines. “We are so proud of our Gadget Girls robotics team and are inspired to see them lead the next generation of girls and young women excelling in science and technology.”

,The Gadget Girls, the only all-girl robotics team in the Wake County district, is on its way to Campbell University this week in hopes of qualifying for the NC State FIRST Robotics competition.