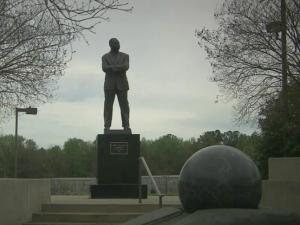 50 years ago, Dr. King visited Rocky Mount just nine months before he delivered his monumental “I have a Dream” speech in Washington, D.C. He had traveled by plane to visit friends who lived in the area. While he was there, he delivered a smaller version of his speech to Rocky Mount high school students.

“When he came here he was important, but he wasn’t famous yet,” said NC State Senator Angela Bryant, who was in the audience that day in 1962.

Bryant will speak at Friday’s exhibition opening along with Joyce Dickens, CEO of the Rocky Mount Community Development Corporation. Both of the speakers will talk about what it was like listening to Dr. King in 1962 and how it shaped who they are today.

“We’re still fighting the same battle,” Bryant emphasized. “People who favor civil rights and social justice have to work harder, talk louder and outnumber those who would be against us.” When she looks around Rocky Mount, she sees the need for this exhibit, to remind people of just how history can fade away if we don’t continue to educate generations to come.

The exhibit will also recognize Dr. Booker T. Washington’s 1910 visit to Rocky Mount. Washington, an educator, author and African American civil rights leader, visited Rocky Mount only briefly, but he spoke to a crowd and participated in a town parade during his time there.

“This exhibit explores the history of Rocky Mount and how its location at the intersection of major railways made it easy for people like Dr. Booker T. Washington and Dr. Martin Luther King, Jr. to visit,” says Alicyn Wiedrich, curator for the Maria V. Howard Arts Center, about tonight’s opening. “It also shows the present day impact these men had on the city.”

The exhibition is entitled “Where the Dream Began: Dr. Martin Luther King, Jr. in Rocky Mount, N.C.” It consists of a variety of pictures and other memorabilia from the leaders’ visits.

An especially important part of the exhibit is an audio recording of a speech delivered by Dr. King in Rocky Mount in 1962. The recorded speech, which was a precursor to Dr. King’s “I have a Dream” speech, was restored by NC State University Professor Dr. Jason Miller.

In addition to the MLK exhibit, this month’s First Friday will also include a Litter Art Show reception, face painting, planetarium and laser shows and more. For more information on First Friday, visit imperialcentre.org or call 252-972-1266.

The Imperial Centre is located at 270 Gay Street.