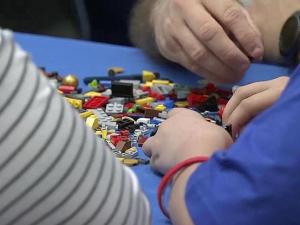 Raleigh, N.C. — The Raleigh Convention Center is a Lego lover’s dream come true this weekend. The Brickmania Lego Fan Expo is a sellout for fathers, sons, mothers and daughters lured by the possibility of the building blocks.

Darrin Whitley was there piecing together a football field with his nephews.

“Sometimes I feel like I’m more excited about it than they are,” he said. “I mean, who doesn’t like Legos?”

Exhibits ranged from the hands-on to the elaborate. There were skyscrapers, combat zones and a 25-foot-long model of the U.S.S. Missouri made with more than half a million bricks.

“I have never seen so much Legos in my life,” said Madelyn Land.

John Gjertsen was drawing attention with his Lego tie.

“I’m getting a lot of compliments today,” he said.

The snappy neckwear was created by his sons. Six-year-old Valor says Legos really build him up.

“Legos are like the thing that I do whenever I have nothing to do because it usually cheers me up by building something,” Valor Gjertsen said.

Lego fans at Brickmania ranged from the very young to dads like Jason Adcock, who sees Legos as more than just a toy.

Thousands more Lego fans are expected to follow in his footsteps to Brickmania for a second soldout day on Sunday.

,The Brickmania Lego Fan Expo is a sellout for fathers, sons, mothers and daughters lured by the possibility of the building blocks.