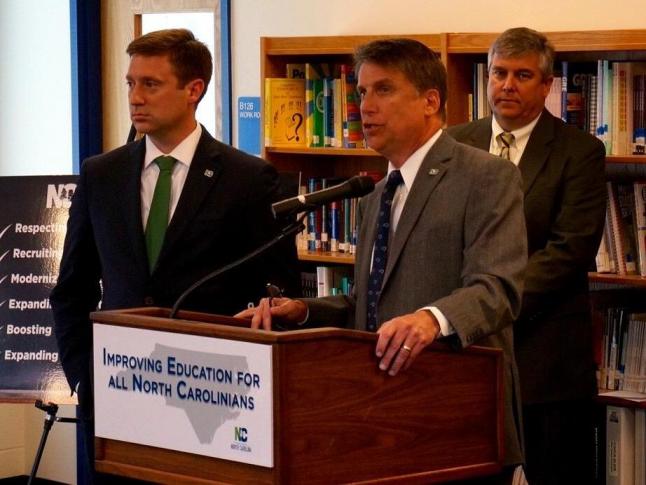 Jamestown, N.C. — Gov. Pat McCrory used the school library at his old high school Tuesday to pitch an education budget proposal he says would raise the average teacher salary to $50,000 per year in North Carolina.

“The average pay increase will be approximately 5 percent. … That’s more than $2,000 per teacher,” McCrory said has he spoke at Ragsdale High School’s media center.

McCrory’s plan did not come with full details but was a series of bullet points that listed goals for the upcoming budget. Lawmakers will return to Raleigh on April 25 to draft the state’s $21 billion tax and spending plan.

It’s traditional for North Carolina governors to roll out pieces of their budget wish list in advance of a formal budget document. It was unclear Tuesday how much his proposal would cost or exactly how much salaries would be going up.

Teacher salaries in North Carolina are paid both by the state government and, in many counties, by a local supplement. During the fiscal year that ends June 30, the North Carolina portion of the salary is about $43,906 for the average teacher, and salaries for teachers without special certifications top out at $50,000 per year.

Raising the state-paid average teacher salary to $50,000 would be an expensive bump, even in a year when economists are expecting a state budget surplus.

However, when teacher supplements from counties are counted, North Carolina teachers make about $47,783 per year, according to the National Education Association, a national group that represents teachers.

Questions to McCrory’s press office about which number the governor intends to raise to $50,000 weren’t immediately answered, but the figures McCrory discussed in the news conference were more consistent with an average that counts county supplements. That would mean average teacher pay would remain below $50,000 in counties that provide little or no supplement.

McCrory also said that his budget would provide a 3.5 percent average bonus to teachers and principals, “with a greater share going to veteran teachers. This will equate to a $5,000 bonus for our veteran teachers with more than 24 years of service.”

Teacher pay is a perennial budget issue for North Carolina governors and lawmakers alike. In the 1990s and the years after the turn of the century, the state’s teacher pay climbed to around the national average. But during the recession, pay was frozen, and North Carolina has regularly been among the bottom five to 10 states for teacher pay in annual surveys.

In the past two years, lawmakers have focused on raising the annual starting salary for teachers to $35,000.

While the prospect for pay raises is welcome among educators, some advocates expressed skepticism Tuesday.

“Once again, there is no long-range plan to elevate public school educators to the head of the class, only election year proposals that do little to make up for years of disrespecting the education profession and dismantling our public schools,” said Mark Jewell, vice president of the North Carolina Association of Educators. “It also leaves education support professionals with nothing. There is a reason educator turnover rates are at historic levels. The governor has a track record of signing whatever the legislature sends him, even if it’s a budget that ends up making North Carolina the second-worst for teachers in America.”

It’s unclear how much of a raise, if any, school bus drivers, cafeteria workers and other school support personnel will see under the governor’s plan.

“We are not releasing that yet, but we will have money included for those employees,” McCrory said, adding that they would be part of an overall plan to raise salaries for all state workers.

Among the other proposals rolled out as part of McCrory’s education sketch were:

,Gov. Pat McCrory says his education proposal will raise teacher salaries to an average of $50,000 per year.