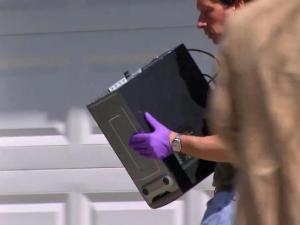 Raleigh, N.C. — For the second time in a month, authorities searched and removed items from the Raleigh home of a former North Carolina State University football player.

After his days as a wide receiver and running back for the Wolfpack in the late 1990s, Leak came under suspicion of Medicaid fraud for his work with a behavioral health counseling business known as Nature’s Reflections. According to a 2015 search warrant for that business, employees claimed Leak told them to “write service notes for services not rendered.” Nature’s Reflections billed Medicaid for $8.7 million between 2012 and 2014, more than any other counseling agency of its kind in the state.

In that search, federal investigators seized a high-end sports car that Leak helped purchase for State basketball player C.J. Leslie. Agents said the down payment for the car came from the counseling business.

On Wednesday morning, federal agents wearing vests from the Health and Human Services Office of the Inspector General moved in and out of Leak’s Stone Kirk Drive townhouse. At one point, an agent with the State Bureau of Investigation directed traffic while a BMW was removed from Leak’s garage.

Last month, it was state agents with the SBI and the Secretary of State’s Office who conducted a search.

Authorities involved in both raids declined to offer detail on what they were looking for, and Leak did not want to comment.

,For the second time in a month, authorities searched and removed items from the Raleigh home of a former North Carolina State University football player.