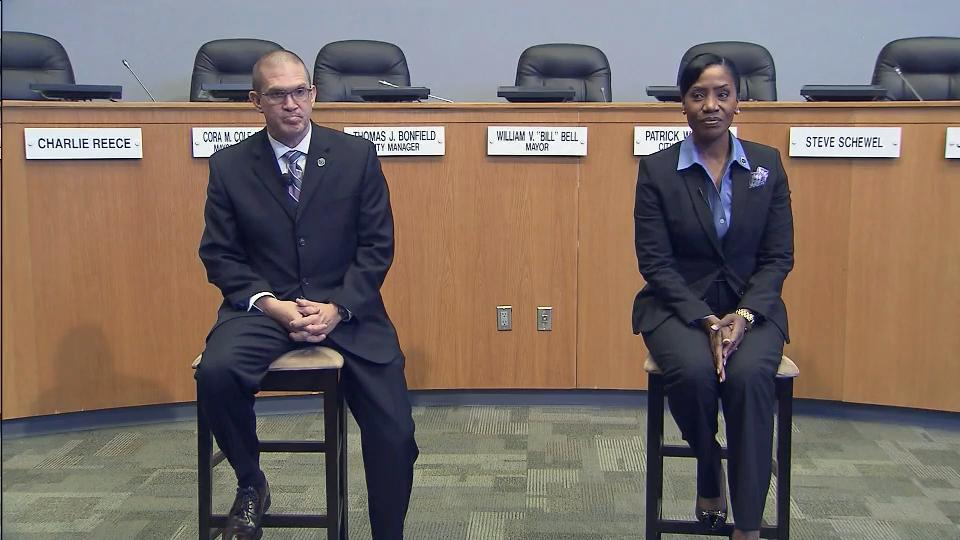 Durham, N.C. — The two finalists for the position of Durham police chief said Wednesday they hope to build a more transparent police department and work more with the Durham community.

Cerelyn Davis, a deputy police chief in Atlanta who oversees that department’s Strategy and Special Projects Division, and Michael Smathers, a major for the Charlotte-Mecklenburg Police Department who heads the Field Services Group, were questioned by reporters Wednesday morning in advance of a 7 p.m. community forum at City Hall.

“We have to change the manner in which we encounter citizens,” Davis said. “We have to ensure that our enforcement efforts are data-driven and not painting a broad brush across a particular community because we know there may be a few bad people there.”

A recent study by RTI International showed that black men were more likely than others to be pulled over by Durham police, but city officials said policies and procedures have changed in recent years to lessen that racial gap.

City Manager Tom Bonfield cited the spike in violent crime and unhappiness within the police department as reasons that he decided a change in leadership was needed at the police department. Former Chief Jose Lopez retired at the end of December, and Deputy Chief Larry Smith has been serving as interim chief since the beginning of January.

“I believe that crime fighting has to be laser-focused on individuals who are committing the crime,” Davis said, noting that statistics show 75 percent of crimes are committed by the same perpetrators.

The department needs to work with prosecutors to get those people off the street, work with programs to reduce recidivism and work with local residents to help fight crime, she said.

“When they see the police, it’s not about we’re here to terrorize you. It’s about we’re trying to make your environment safe, and this is how we’re going to do it, and this is why we’re doing it,” she said.

Smathers said trust needs to be rebuilt between the police department and the community.

“A community itself is not the target. The behavior of certain individuals in those communities that are preying on those folks, that is the priority, and the department needs to shape its methods, shape its philosophy and shape its leadership and direction to be able to attack that so that community will work with you, so they won’t feel under siege,” he said.

Durham has delayed putting body cameras on its police officers as officials try to hammer out policies for their use.

Smathers said he supports body cameras, which as already used in Charlotte, while Davis said she thinks more members of the community should be involved in crafting Durham’s policy.

“It can’t be that every video that is taken by an officer gets put on the website to get pushed out. You could really jeopardize some very serious cases,” Davis said. “I think it’s important that we go through an education process before we come up with what that final policy looks like.”

“I’m a proponent of being as transparent and as forthcoming with that video footage as is lawfully allowed,” Smathers said. “You have to balance that with compassion related to the victims and the incidents that are captured there as well, but I know there is keen public interest in that footage. It’s a very important accountability tool so the public can see – and we can see – how the officers are performing.”

,The two finalists for the position of Durham police chief said Wednesday they hope to build a more transparent police department and work more with the Durham community.