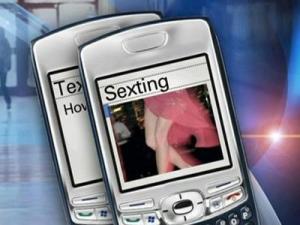 On Thursday, all middle and high school students watched a video titled “Real Talk About the Dangers of Sexting,” which is part of their “Keep It 100” no-sexting campaign.

The school system developed a contest to have the students create public service announcements. The project was designed to bring awareness to the topic and get others to stop sexting.

“The fact that it is a felony and it could ruin so much of a person’s future is something that young people are not really aware of,” said Caleb Edkins, a student at South View High School. “It definitely shocked me to know how much it goes on and how few people understand that.”

While some of the videos were funny, they all delivered a very serious message. Superintendent Frank Till said he learned something from the project.

Till said he hopes the video will help students realize that sending explicit photos could haunt a person’s life.

“We found out that the kids had vaults that they could hide these pictures in, and we began to hear stories about potential suicides and things,” Till said. “So, as a community, with the leadership of our young people, we decided we were going to take it on.”

The video will be played again Thursday at 7 p.m. on the school cable channel 5.

,School leaders in Cumberland County are taking aggressive action to stop students from sexting, or sending explicit photos or dialogue, through text messages.