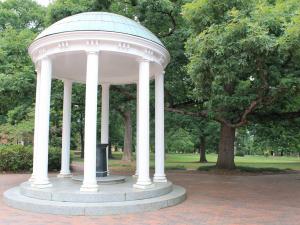 Chapel Hill, N.C. — Several hundred students gathered at the Old Well on the University of North Carolina’s campus Thursday evening to bring light to the fight against sexual assault.

Leaders of campus fraternities say they are taking ownership of a problem that they say outrages them – sexual assault on college campuses. The theme of the rally was “it’s on us”.

UNC Greek community leaders say one of out every five women will suffer sexual violence on a college campus in America.

UNC has come under fire in recent years on the issue. A group of female students filed a complaint, claiming the administration did not take the threat seriously. The university then created a 22-member task force to rewrite its policy on responding to reports of sexual assault.

Andrew Clark, the vice president of the Sigma Phi Society, says the culture in the Greek community needs changing.

” I mean, there is definitely a culture, unfortunately, in many fraternities that just does not respect the idea of consent, and just has no recognition that there is a problem of sexual assault,” Clark said. “We recognize this is a problem and we want to do everything we can to stop it.”

The students participating in the walk raised money for the Orange County Rape Crisis Center.

,Several hundred students gathered at the Old Well on the University of North Carolina’s campus Thursday evening to bring light to the fight against sexual assault.