The Sheraton seems to be the perfect place for a Wake Forest, NC robber on the run to go since it boasts it is perfect for “work, play or simply relax at our New Orleans hotel, centrally located within an atmosphere of endless excitement in one of the world’s greatest cities.”

Unfortunately for Stalf the Orleans Parish Prison (OPP) where he is currently being held got only two stars on Yelp.

Despite active K-9 searching the suspect was not apprehended at the scene as Stalf was apparently already headed to New Orleans for some beignets and a cafe’ au lait at Cafe Du Monde with his appropriated Wake Forest cash.

But before departing Wake Forest, Stalf posed for a new profile picture at the PNC Bank. Unfortunately this picture will be more likely used for his court case than his Facebook account.

Stalf’s robbery will have to go down in Wake Forest history as the best robbery surveillance photos ever. Even officers were amazed by how the camera caught his good side.

Stalf will be transported back to Raleigh and charged with common law robbery. Too bad there isn’t a first degree felony dumb ass count to slap on as well.

Stalf’s alleged involvement is especially surprising since his zodiac sign (Taurus) indicates he may be “humorous, quick-witted and a consummate communicator whose mind is constantly bubbling over with ideas. Far from your typical Taurean brothers and sisters who are a little slow off the mark, you are endowed with considerable speed and business acumen as well.” Ixnay on the business acumen part but apparently his speed attribute let him make it all the way to New Orleans so quickly.

Lanson, Lance, or sometimes Lanny Stalf appeared to hail from Oregon or Illinois according to online documents. 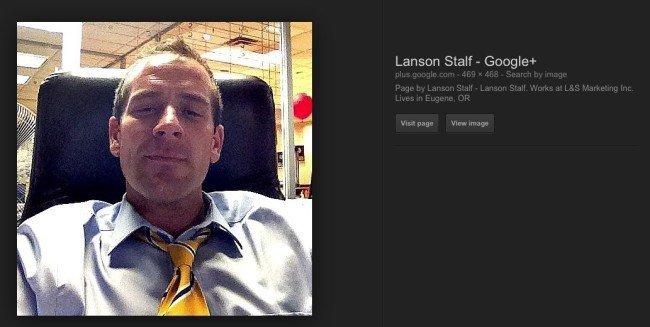 A Lanson Stalf from Oregon, who certainly appears very similar, reports on his to be little used Google+ page that he lives in Eugene, Oregon and works for L&S Marketing. Requests to L&S Marketing to confirm have gone unanswered at press time.

When you look at that Lanson Stalf’s Google+ page you see he is a fan of the same team the robber is sporting the logo of on his hat. Go Ducks!

As silly as this bank robbery was you’ve got to wonder if there isn’t some underlying issues that prompted this event.

Somewhere we just feel that either financial pressures, chemical addiction, divorce, or some other event let Lanson Stalf suspend even the most basic preventions of being caught. The only other thing he seemingly could have done was leave his email at the scene.

But then again, emails we have sent to Lanson’s Hotmail account have gone unanswered as he was probably too busy in New Orleans scoring and pouring.

Public records for Lanson Paul Stalf indicate he has not been a stranger to trouble with a number of DUIs, charges for obstructing justice, and aggravated battery in Illinois and a warrant in California.

Wake Forest Police get their man yet again.