Twas the night before Christmas, when all through Wake Forest
Not a business was stirring, not even the florist.
The stockings were hung by the gas logs with care,
In hopes that St. Nicholas, or some other culturally sensitive similar facsimile, soon would be there.

The children were nestled all snug in their beds,
While visions of The Factory danced in their heads.
And mamma in her nightie, and I in my knickers,
Had just locked our door for some adult holiday snickers.

When in the driveway we heard car glass shatter,
I sprang from the bed to see if it mattered.
Away to the window I stumbled and fell,
Tore open the gun safe and picked up the cell.

The moon on the breast of my sweet loving bride,
Distracted me from wanting to pull back the slide.
When what to my wondering eyes should release,
But a boss squad car from the Wake Forest Police.

With a snappy salute, so lively and quick,
I knew in a moment, “Hey that looks like Dick.”
More rapid than eagles his taser it came,
And he whistled, and shouted, and called them by name!

And then, while tinkling, I heard through walls tiled
The prancing and pawing of our dear little child.
I knew in my head, that fun times were over,
Unless I could find that damn doll named Grover.

The Muppet was dressed all in fur from head to fake foot,
And his blue well worn body was all dirty like soot.
With a bundle of hope I grabbed him with glee,
To return to slumber our precious Jimmy.

Success and good fortune struck us that night,
As the kid went to sleep when I tucked him in tight.
He gave us ten minutes to celebrate St. Nick,
As I jumped from bed and grabbed my old iPhone. (Seriously, you thought we’d actually rhyme that one. Shame on you.)

From downstairs I heard Santa appear,
As poop on the lawn was left by reindeer.
It didn’t bother me or raise any ire,
Because I soon discovered the house is on fire! 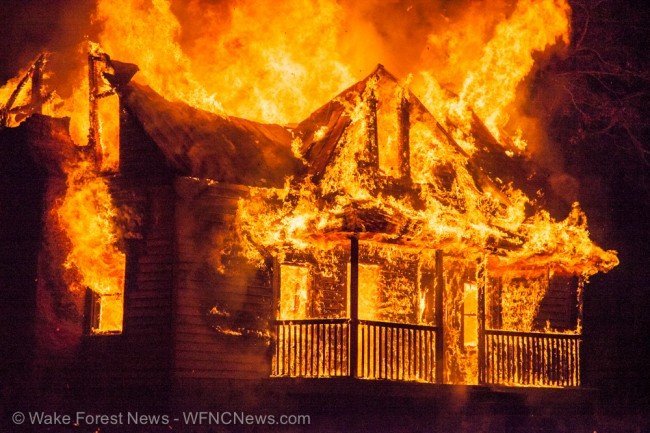 The Department of Fire I called in a hurry,
In hopes they soon came with that Chief called Early.
They came a wooing and flashing their lights,
And scared off Santa, he took to quick flight.

But left behind after all men doth leave,
Was the best ever Wake Forest sweet Christmas eve.
Our Town cared for us and we think that it’s great,
That’s why we live here, some call it good fate.

The Forest of Wake brings joy to our hearts,
It makes us love home in spite of dad’s farts.
The place is so special we just want to say,
Merry Christmas to all and have a good day.