This morning the cremated remains of Youngsville Assistant Chief Jeff Fields made their final trip back to the station for a public visitation with the family.

The mood was notably reserved and somber as firefighters from a number of different departments, and local residents and friends, came together at the Youngsville Fire Department Station 1.

Fields was known to drive truck 41 as much as possible and since he had responded to over half of all calls over the last decade, he was behind the wheel of his beloved truck quite often.

Truck 41 was draped in black bunting in preparation for the trip to Bright Funeral Home in Wake Forest to pick up his remains and bring Assistant Chief Fields back home.

A memorial had been readied in the station to celebrate the memory of Fields, a man with a big smile and a large sense of humor. Fields would have most certainly appreciated the advice of the leader of the honor guard to those who would participate, “If you feel faint just march yourself off before you pass out. Hey, its happened before.”

The mood was somber and quiet as the gathering members of various fire departments arrived while waiting for friends and family to come for the visitation to be held.

Firefighters milled around the station and made idle chat as they awaited the return of Fields on his trusty Engine 41. Not long after, the faint sounds of sirens could be heard in the distance as the Franklin County Sheriff’s office led Truck 41 back into Youngsville with lights and sirens blazing.

Former Youngsville Chief Scott White, who is now a Captain with the Raleigh Fire Department, was asked to bring in the remains of Assistant Chief Fields upon his return to the station for the last time.

Members of the honor guard stand next to the remains of Assistant Chief Fields after they were returned to the station. 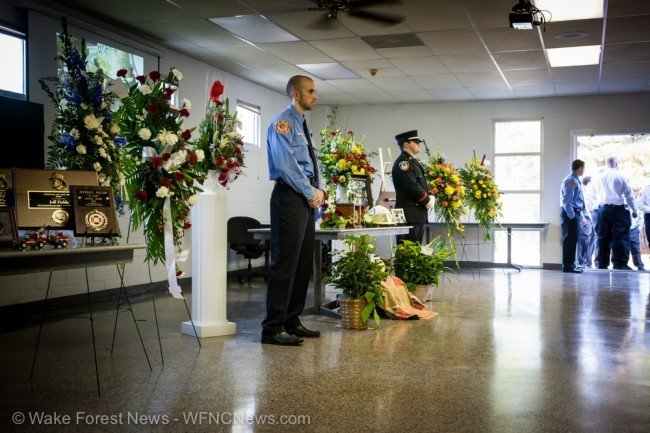 The mood can only be described as both reverent and loving as men from the Youngsville Fire Department stood in recognition of Fields as they faced the family members prior to visitors being allowed in.