Thanks to a tip from our friends over at Wake Forest Fiber we learned of an upgrade to cell phone service. The new equipment is being placed on top of the water tower downtown by Trevor and his crew from Alcatel-Lucent on behalf of Sprint. 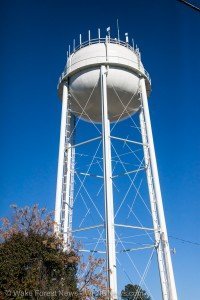 For someone who pays for Time Warner cable and only uses it while at home for basic internet access the new Sprint upgrades might offer an economic advantage. Sprint offers an unlimited data plan for $50 a month for the first phone and they do have phones with hotspot capability so you could use the hotspot for your home wifi.

We’ve not tested the service and the new equipment has yet to be installed so we will have to wait and see what actual speeds are. The equipment is scheduled to be placed on top of the Water Tower in Town later in the week.

We were told that although the new equipment was being installed this week that it might still be several months before the equipment would go online for customer use.

But faster internet is good for both a happy life and an active business. Your internet can never be too fast, can it?