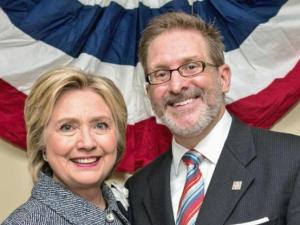 Philadelphia — As Debbie Wasserman Schultz decided not to gavel in the Democratic National Convention amid leaked emails that showed favoritism among party leaders toward Hillary Clinton over Bernie Sanders, one man in the North Carolina delegation is making no secret of his preference for Clinton.

Bruce Thompson may know Clinton better than any other member of the North Carolina delegation.

“She has a great sense of humor. She’s a warm person. I can tell you she’s been an amazing role model for my two girls,” Thompson said.

The Parker Poe attorney from Raleigh supported the Bill Clinton campaigns of the 90s and helped raise money for and direct Hillary Clinton’s presidential runs in the Tar Heel State in 2012 and 2016.

“As soon as she entered the race for president, then the attacks came,” Thompson said.

Thompson cringes at the constant criticism of a politician and person he deeply respects.

“Some of her critics think she’s dishonest. I think it’s incredibly unfair,” he said. “I think she’s completely trustworthy. I think the thing that frustrates me the most in a campaign is I wish every voter could spend some time with her one on one.”

Eight years ago, Thompson’s daughter wrote an essay about Hillary Clinton and recalls when the candidate responded.

“When she saw it, she wrote an incredibly nice note to my daughter. Now, she didn’t have to take the time to do that. She had our vote, she had our support, but I think she was touched by what she meant to an 8-year-old girl,” he said.

Thompson now can’t wait to witness his friend take the stage Thursday to accept her party’s nomination for president.

“I joke with people that I feel like a real life Forrest Gump because I find myself in places with her,” he said.

Thompson said North Carolina is in a special place this election because it is a battleground state.