Thursday was a bad day to be at the intersection of Rogers Road and Marshall Farm Street. As police and the fire department dealt with an earlier accident at the intersection another accident occurred as one car collided with the rear of another. At least the response time to the second one was incredibly fast.

And then there was the purse snatching at Walmart. An 81 year-old Wake Forest woman had her purse appropriated by some asshole while shopping.

One kind reader contacted us and said, “Please find out what happened last night on East Oak Ave. It’s off of North Main near The Border Restaurant (in WaFo.) There was a loud boom around 9 pm. It sounded like a transformer blowing – it was LOUD. We looked outside & there were two white vans on E. Oak w/a lot of people w/flashlights. A couple of minutes later, two WF police cars came. They took one guy away in handcuffs. They (WFPD) looked like they had on full gear. One van left w/the back doors open & one side door open – weird.”

We Love Your Tips at Wake Forest News!

Officially the Wake Forest Police confirm there was an incident in that area last night, but said the matter is still being investigated so there’s nothing that can be shared right now. However, we did find a mug shot of someone arrested on East Oak Avenue yesterday, see below.

The following information is from law enforcement sources. All information posted to the Wake Forest News site is data gathered from public sources and is subject to change without notice. The information is provided without warranty or representation, express or implied, with respect to the quality, content, accuracy, completeness, currency, information, text, graphics, images, or other materials and items contained in or displayed on this site. All such items and materials are provided on an “as is” basis and the user is fully and solely responsible for the use of those items and materials and for any results or consequences of such use. Information is subject to change as case investigation proceeds. Individuals arrested on the basis of probable cause have not been charged.

Keep in mind the crime rate in Wake Forest is very, very low. Don’t let the fact some people got into trouble, freak you out. Arrested does not equal convicted. All individuals arrested or charged with a crime are presumed innocent until proven guilty. 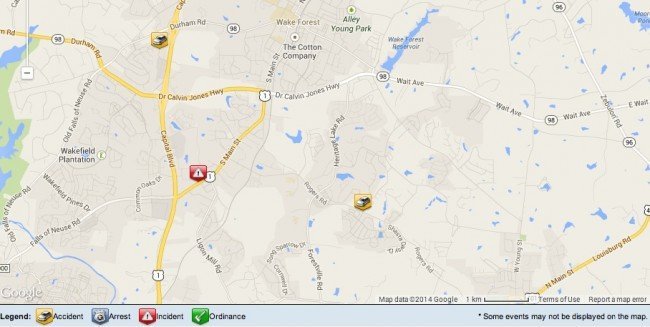 Wake Forest Police Department have not reported any arrests made yesterday but the Wake County Jail reports one Wake Forest arrest at 110 East Oak Avenue. 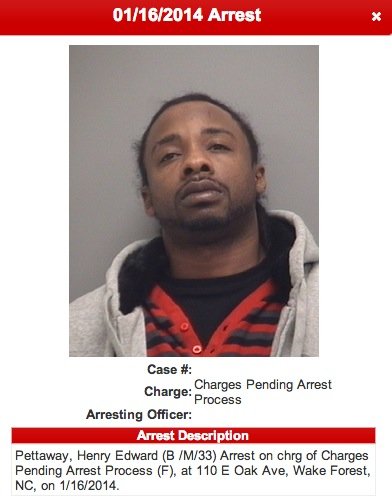