Not that long ago we had the chance to meet with Chief Tim Pope at the new Bay Leaf Station 1 and take a tour of the new building. While Bay Leaf is typically a bit out of our range of coverage on a regular basis we had to go take a look once we found out they had a modern fire pole. I mean seriously, how cool is that?

The pole has a door in front of it on the second floor which looks like it is always propped open. The door was probably a building inspection requirement.

There is the pole hole covered with a hatch that opens when you toss your body through it and it drops firefighters right into the bay below.

Now besides the cool factor the pole has a very functional purpose even in the modern times. When the Bay Leaf station was replaced and expanded to meet the needs of the community the station needed to be larger but the footprint could not grow. So the only thing to do was add a second floor.

To keep up really fast response times the new station either needed a slide pole or firefighters were going to have to haul butt down the stairs or God-forbid, use the elevator.

Chief Tim Pope is the man in charge over at Bay Leaf. And like all of our local fire department, the Chief gets to answer to a board of directors.

Pope comes from a long history of serving in the fire service. He’s been the Chief at Bay Leaf for the last three years and says he loves the “challenges that a combination department brings and blending the paid and volunteer staff together.”

Pope says, “The challenges Bay Leaf has faced have been going from a rural area to an exploding development area with some houses in excess of 10,000 square feet. Those are bigger than many commercial buildings.” With rapid growth comes the need to make sure the fire department grows as fast to maintain a level of safety and protection the community expects.

And to give Bay Leaf even more of a twist the area has a different mix of calls than usual. While most departments see about 75% of the calls as medical in nature and the other 25% are fire and wreck calls, Bay Leaf is the opposite.

Pope was with the Nashville, North Carolina fire department where he served as the Fire Chief before coming to Bay Leaf. He started his firefighter career as a junior volunteer firefighter in Kenly, North Carolina “Friendly Kenly” in 1980 and has been involved in the fire service ever since.

Bay Leaf currently has about 50-60 volunteers who help provide services in conjunction with the smaller paid staff. At station 1 there are three paid firefighters on the overnight shift while Station 2 is manned with paid staff from 7 AM to 6 PM and volunteers who stay at Station 2 overnight.

Most people probably are not aware Bay Leaf has three stations. The one on Six Forks Road is the most visible. 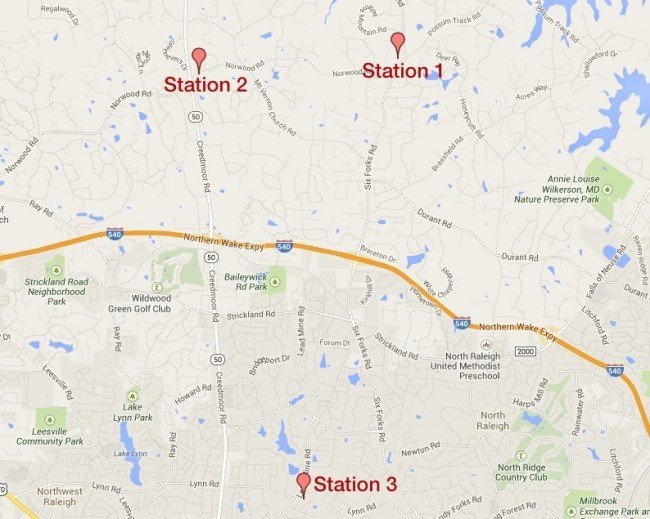 Overall the Bay Leaf new main station is a beautiful facility and the team over there looks like they are professionally serving under the competent hands of Chief Tim Pope.

The Bay Leaf day crew caught during an unexpected break. They had just returned from something when we caught them either checking the weather or watching the Price is Right.

Training is a keystone of the Bay Leaf Fire Department and the training facilities are top-notch.

Nice kitchen on the second floor of the Bay Leaf station.

Not the Ritz but a nice diversion from the usual This End Up furniture collection seen at most local fire stations.

The new 2,000 gallon Bay Leaf pumper. The latest truck in the fleet.