Wake Forest Heritage High School senior Austen Brennan might just be 18 but he has his sights set on building on his love of action to start World War III. This isn’t a recent development, when he was 16 he began writing his series of books and his first is finally out.

Brennan has recently released his first action adventure novel and has embarked on a journey of character development and getting to know women better. Austen said, “A well developed female character has their own unique flaws and needs to be much more than just a sexy man. I’ve learned to be more aware of the slight differences like different sensitivities to include in my writing.” Now there’s a kid who is going to get a prom date.

Brennan is a big fan of political thriller writer Vince Flynn who sadly passed away in 2013 at the age of 47. “I was really sad when Vince Flynn passed because as someone I admired I was hoping one day he could read my books,” said Austen. 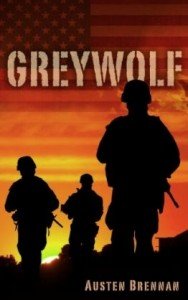 Grey Wolf, Brennan’s first published novel has launched with a number of glowing reviews on Amazon for a new author and it’s finding an eager audience of those interested in military action adventures.

Brennan is a local Wake Forest high school student athlete. He is just as adept on the pitcher mound as he is inside his WWIII imagination. His baseball teammates have been very supportive of his writing debut, especially since some of them have managed to find themselves as characters in the book.

Grey Wolf is described as the story of how “World War III has begun, and the United States is invaded by an alliance of four countries determined to destroy everything and everyone in it. Three 15-year-old boys are thrust into battle after they join up with a team of U.S. Army Rangers known as “Grey Wolf.” Soon they learn that in every shadow lurks a traitor, and that every ally might just as easily plant a knife in their backs. While the three young friends are determined to defend their country at all costs, none of them could have imagined the horrors they will experience, the deception they will uncover, or the prices they will pay.” Call us crazy but that sounds a lot like high school years as well.

The author even includes himself in the book as one of the heroes.

Local Raleigh readers will enjoy the many references to Wake Forest in the book. It brings the story to our doorstep and makes us bond even closer with the characters. A large portion of the opening of the book actually takes place in Wake Forest.

When Austen graduates from Heritage High School this year he’s headed to Campbell University where he plans to pursue a major in homeland security.

As for our personal review of the book we have no clue what people like to read. If you are looking for a sex filled 50 shades of something you won’t find it here but if you like military action thrillers that cost less than $3, we doubt you’ll be disappointed. For Amazon Prime members, the book is even available to borrow for free on their Kindle device.