Last Saturday people gathered in downtown to celebrate Wake Forest Mardi Gras. Sadly there were no women to be found willing to flash the crowd for beads. Well there was this one guy, below, whose intentions were unknown at the time of publication. We had been hoping for this. 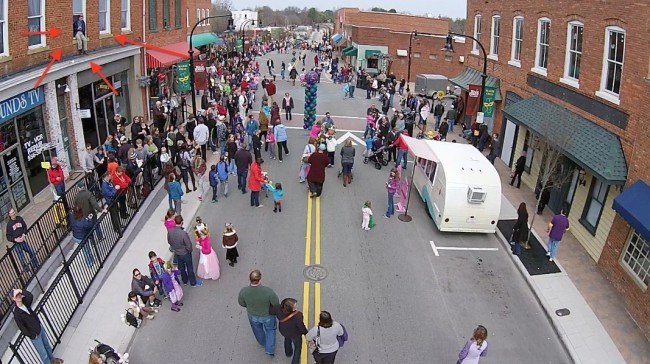 The only hitch we found was the one attached to the cart pulled by the hoofed animal. The Town did an amazing job of pulling off the event which managed to drag people from their homes and reintroduce them to the merchants downtown. “How you doin’.”

Mardi Gras arrived in North America as a French Catholic tradition which we now thankfully celebrate with open arms in this southern Baptist town.

We had our hands more than full covering the parade and downtown events this year and it literally took a village to create this coverage.

We brought out the remote quad-copter to get some aerial shots. It was skillfully guided by Dan Holt from Wake Forest Fiber and the photography was from local resident and man about town, Roe O’Donnell, who so graciously shared the beautiful photos below from the festivities.