What began as a whisper in my ear about allegations of drug traffic passing through Wake Forest started me thinking, for once. Don’t get used to that happening too much, it’s exhausting.

It occurred to me the biggest misperception people probably have is to assume there are not drugs in our innocent and friendly Wake Forest. Let’s get real. There are, but there have always been illegal drugs here and everywhere.

The biggest mistake is not assuming we have a drug problem but to assume we don’t have one. Parents who think their kids don’t know where to get drugs, are fooling themselves. And you want to know why? It’s because the single biggest source of drugs is the medicine cabinet. Heroin and cocaine are drugs of choice as well for many.

Being outraged or alarmed about the use of drugs is probably the wrong reaction to have. The better choice would be for parents to take proactive action to talk to their kids and to be aware of the warning signs that should at least get their parent radar up and put them at PARENTCON 1, it’s like DEFCON but with kids.

The multiple police and law enforcement units I spoke to in researching this piece, SHP, DEA, RPD, WFPD, all said the same thing to me, drug usage and addiction knows no socioeconomic boundaries. It can impact young children and older residents. 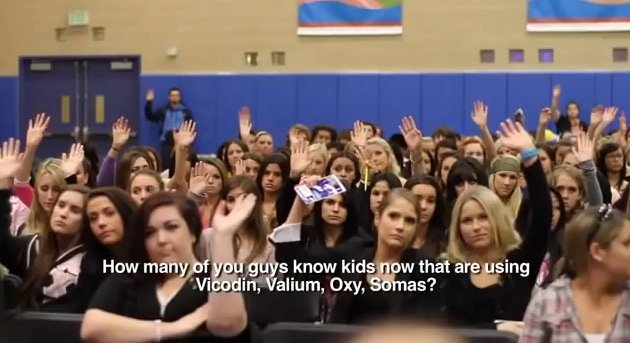 If you think just because you are rich or because you live in beautiful Wake Forest that your kids are not doing drugs or have access to them, you are an idiot. And I’m saying that bluntly because I care and need for you to wake up.

The kids you least expect know where to meet in the parks and woods in the area to get together to do heroin or swap drugs. Undercover officers here in Wake Forest told me you can easily find drug trash on the ground if you know where to look. But that’s not just in Wake Forest, it’s in every town across America and from my travels, the world.

I also learned what a North Carolina drug courier looks like. They look like us. Drug syndicates are smart in knowing who to pay to move their drugs. If you pay them enough money a 77 year-old lily-white grandmother can be persuaded to carry 300 pounds of pot in her car. It happens, said the NC State Highway Patrol. A family of five can stash drugs in their car under the chid seats and be little suspected rolling down the highway.

Because of the pervasiveness of who mules or transports the drugs, law enforcement said it’s impossible to profile who is transporting the stuff. Catching quantities of drugs rolling up Capital Boulevard or in on NC-98 is an impossible task. Honestly, that’s not going to happen without a confidential tip.

All agencies say the single best source of information to catch a drug dealer is citizen tips and confidential informants, which they welcome. Hell, if they could bake a cake for a tip, they’d all gladly do that.

They all say people should call them with tips and information if they want to try to stem the tide of illegal drugs in their area. And doing that is actually important. With drug dependance comes crime. More drugs in an area creates the type of local traffic I doubt anyone wants passing down their streets.

However nobody wants to turn in their own child. While understandable it might be exactly the wrong choice to avoid doing so if saving your child is your top priority.

In one reporting period here in the Wake Forest News police blotter section, exactly 33 percent of all arrests were for drugs and the majority of those were a joint caught on a traffic stop.

Marijuana is everywhere. It’s pervasive. That ship sailed, but it sailed decades ago.

If we are counting on the Wake Forest Police Department or any local or national law enforcement agency to stop the flow of drugs into or through Wake Forest, we must be smoking something ourselves.

Heroin is a Problem in Wake Forest

The most rapidly rising drug law enforcement talked about was heroin use in the area. Heroin can be sniffed, smoked, injected or swallowed. It is a highly addictive drug that has consequences.

Most heroin is substantially less than pure. By the time it reaches our residents and kids it has been mixed, cut, and remixed to expand the quantity the drug dealer has. Those added unknown substances can have a serious negative impact to users. Users have no idea what they are putting into their body. But when the demand for the high is that powerful it’s unlikely they will care, at all.

The State Highway Patrol Drug Interdiction Unit said heroin is quickly becoming the drug of choice due to its easy access and relatively low-cost. Wake Forest Police said a local little bindle or baggie costs between $20-$40. Yes, there is heroin in Wake Forest.

Economic downtimes have driven people towards drugs that get them high for less money and that’s only helped the sale of heroin. Hell, just about five weeks ago we had a big heroin bust in Wake Forest.

According to the Raleigh Police Department, “RPD officers and detectives continue to work to interdict drug traffic, arrest those connected to it, and combat the violent and property crime connected with drug offenses and drug addiction. In recent years, the department has seen an increase in the volume of heroin seized by its drug squads and other members of the department, and – like many other law enforcement agencies – links at least a portion of that increase to the abuse of prescription pain medications.”

Wake Forest Police share a similar point of view. And if you want to cast blame on a gateway drug we need to stop casting blame on marijuana and start casting blame on our medicine cabinets in our bathrooms or the bathroom at grandma’s house. But more on that in a bit.

Here in Wake County every single ambulance carries a drug called Narcan. Narcan helps to almost instantly stop an opiate overdose. The administration of Narcan for someone not having a real overdose produces no ill effects and it is damn near a miracle drug for those dying right now from an overdose of drugs like codeine, demerol, heroin, hydrocodone, oxycodone (which Rush Limbaugh was addicted to), lorcet, methadone, morphine, naloxone, opium, oxycontin, vicodin, and vicoprofen.

In other parts of the country, like Ocean County, New Jersey, police officers are trained in the administration of Narcan to save lives from heroin overdoses because they are often the first on the scene.

“The best part of the program is that it is all paid for by money seized in drug forfeitures, Ocean County Prosecutor Joseph Coronato said. “No cost to the taxpayers,” he said.” – Source

I don’t know about you but in my day I was casually around drugs because they were everywhere, as nearly every teen experiences today. It’s not that I sought out drugs but they were easy to find and get your hands on then, and now. And I grew up in one of the richest areas of the country.

But what I observed was the majority of my friends walked away from whatever non-opiate drugs they used, like weed, as they grew up. However some people couldn’t or wouldn’t. I have a few friends that had either chemical or emotional addictive issues and drugs took them down, hard. And let’s not forget other legal and addictive habits like smoking, gambling, and drinking. I’ve lost friends to those as well.

We don’t need to look far to see the path addiction or drug dependency can take you down. Just look at our recent bank robber who was most likely robbing the PNC bank to fuel his drug addiction.

Probably one of the worst strategies to helping people in Wake Forest is to run around and recite that famous Nancy Reagan line, “Just Say No.” Parents who believe just saying no is going to keep their kids protected in a magic drug free bubble are deluding themselves.

Rather than just telling their kids to just say no and feel they’ve been immunized, parents should keep their eyes open for indications of drug use.

What to Watch For

Experts say there are other things you can watch out for as well. Things like unexplained changes in personality, sudden mood swings, sudden lack of motivation, or being anxious or paranoid for no reason. This is not an exhaustive list but you get the point. And none of these symptoms alone is an indication our kids are using drugs. Hell, these symptoms might be similar to depression or just having an onset of a mental health condition.

There is no one thing you can put you hands on except the drugs themselves to prove your kids are using. And law enforcement suggests that what local teens need most is a parent to be a parent. That might mean searching your kids rooms, exhaustively, to look for drugs. They also suggest you search the teens car and any outbuilding you might have. You can watch the video at the bottom of this article for some hiding area suggestions.

Parents can do their best to help or protect their kids and those they care about because like it or not drugs are here to stay in Wake Forest just as they are in every other small town across the world.

Don’t Turn Your Back on Legal Drugs

“The new analysis found that for chronic abusers — people who took [prescription] pills at least 200 days in the last year — doctors were the single most common source named, 27.3% of the cases. Friends and family members were still an important source at 26.4%. High-risk users also bought prescription drugs from friends and relatives (23.2%) and from dealers (15.2%).” – Source

Did you catch that statistic, dealers were the least likely place to get those drugs.

In 2009 the State of North Carolina started Operation Medicine Drop where people can drop off old medications they no longer need so they don’t fall in the wrong hands.

To find the next event to drop prescription drugs you want to dispose of, click here.

Where to Get Help

For parents there are a number of resources available to help if they are worried about their kids using drugs. We truly are surrounded by a community that passionately does care.

Here are some places to reach out to for help if you suspect your child may be involved with drugs.

For Bonus Points, Get Comfortable and Watch This.