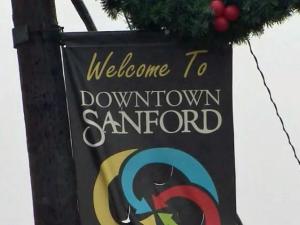 James Partington said he was at the parade Monday when the Christmas cheer came to a screeching halt.

“I heard what I thought was six to eight gunshots,” Partington said. “I just saw people taking off in all directions, so I knew something had happened.”

He has attended the local tradition every year for almost 50 years.

“It was just a sad feeling that all of this stuff happens, eight shots, it could have been eight people wounded. There were a lot of people there last night,” Partington said.

The suspect in this case lost his own brother, 18-year-old Trevon John, during a July 4 celebration this summer.

“We’ve heard rumors that is was some kind of retaliation from the summer months,” said local business owner Tommy Wicker.

Wicker owns a barber shop in the plaza where the shooting happened. It’s usually a popular place to watch the parade, be he said it’s troubling to think it is now a place so many could have been injured.

“You think about it happening in larger cities, but when it hits home, it’s close,” Wicker said.