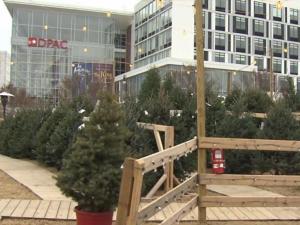 Triangle Residential Options for Substance Abusers, known as TROSA, is an organization dedicated to helping people with drug and alcohol addictions get back on their feet. Two of its Christmas tree lots in Durham were robbed

“It’s really disappointing,” said Adam Long, who works nearby. “Why would you want to rob a charity? I don’t understand.”

A TROSA official said the robber or robbers had weapons and stole cash from the attendants on duty. Police reports show they also took electronics.

“That’s just beyond real,” said Lina Pratt, who was visiting the area. “I mean, they help out people so well, and I can’t believe people would be stealing from them.”

“I don’t believe that people should steal in general, especially from worthy causes,” said Sajj Webster, who is also visiting the area.

A TROSA official said no customers were around at the time, and no one was injured. TROSA supporters hope whoever is responsible will be caught.

“The person must be very desperate, and I hope that person gets help. I’m not sure why someone would be driven to do that. But I do hope that they find him, her. So that person can get help.”

In response TROSA has limited its hours at Christmas tree lots and will no longer be open in the early morning. They are working closely with Durham Police.