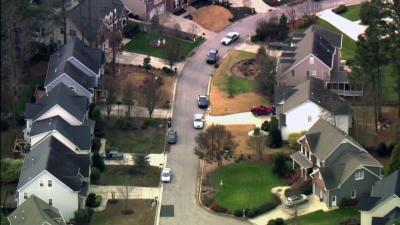 Apex, N.C. — A standoff at a home on Walden Glade Run near N.C. Highway 55 in Apex ended just after 2 p.m. Wednesday when a man surrendered peacefully after firing shots inside the home, authorities said.

Police said Cameron Gilbert, of Apex, fired shots inside the home at 2014 Walden Glade Run, but did not injure anyone inside. Gilbert also fired once out of the front door of the home, police said.

A source close to the investigation said a married couple and their two daughters, ages 12 and 22, and two of their friends, were home when Gilbert came in and demanded to speak with the 22-year-old, who was trying to break off a relationship with him. The source said the father tried to calm Gilbert down and distract him while the others escaped.

Everyone was able to get out, except for one of the girls who was hiding in a bathroom. Police said when Gilbert realized she was still in the home, he let her go, but he remained barricaded and armed inside.

“When officers got on the scene, they heard at least one gunshot in their direction,” Capt. Blair Myhand said.

During the standoff, a shelter-in-place order was issued for residents nearby.

“I saw two police officers that had their guns drawn,” said Lorrie Bondi, who lives nearby. “One was going through the bushes and trees.”

After nearly an hour and 20 minutes of negotiations, Gilbert surrendered.

“Nobody wants this in their backyard or down the street,” said Kingsley Williams. “Kids are all over this neighborhood and really nice families. It’s a great neighborhood, so it’s kind of scary.”

Gilbert was sent to WakeMed for a mental evaluation.