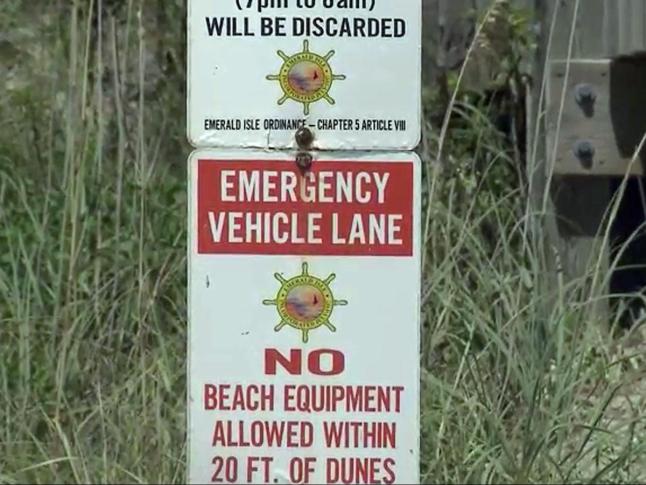 RALEIGH, N.C. — A beachfront home-owning couple’s five-year legal effort to claim a slice of the shore for their exclusive use was dismissed on Wednesday by the North Carolina Supreme Court, preserving a long tradition that the state’s 300 miles of beaches are open to everyone from the dunes to the surf.

The court issued a one-sentence order dumping the case on its own initiative with only weeks to go before oral arguments. The justices didn’t explain why they dismissed the lawsuit by New Jersey retirees Gregory and Diane Nies, who sold their $1.3 million beachfront home this fall.

The Supreme Court canceled its December calendar after last month’s elections flipped the court’s composition, giving Democrats a 4-3 advantage once Judge Mike Morgan is sworn into office in January.

The couple’s lead attorney, J. David Breemer, said the election or the home’s sale may have prompted the case’s dismissal.

The couple sued Emerald Isle in 2011, saying they were deprived of their right to enjoy their private property on the dry-sand part of the beach above the high-tide water line. The ordinance prohibits the construction or installation of anything inside a 20 feet lane seaward of the dunes; even canopies, umbrellas, awnings, chairs or other equipment are banned from May to October so that public vehicles can drive on the beach as needed.

The Pacific Legal Foundation and the Civitas Institute Center For Law And Freedom in Raleigh, which litigate over conservative legal principles, argued that the ordinance and the doctrine it’s based on, that beaches are the public’s inheritance, amount to an “invasion” of private property.

“Normally, this constant physical use of the Nies’ property would constitute a taking, requiring just compensation.” Civitas lawyer Elliot Engstrom wrote in a court filing.

The state Court of Appeals rejected the Nieses’ argument in November 2015. They ruled the town was acting in line with state law and already had the right to drive on dry-sand beach portions of the couple’s property before the Nieses bought it in 2001.

The state’s tourism industry, environmental groups and two dozen coastal counties and towns had weighed in against any change to the long-standing public trust doctrine, which treats the beaches as a common asset available for everyone’s use.

Had the couple won, beachfront property could be fenced off, lowering the appeal of coastal communities for tourists and harming restaurants and other businesses that depend on beach visitors, said Rolf Blizzard, chairman of the North Carolina Travel and Tourism Coalition, a lobbying group.

“A change in the presumption of the public policy would have had dramatic consequences,” he said.

Though the couple’s home state of New Jersey treats dry-sand sections of beaches as private, that’s not the case in North Carolina, the lower-level appeals court ruled.

The public’s right of access to dry-sand beaches “is so firmly rooted in the custom and history of North Carolina that it has become a part of the public consciousness. Native-born North Carolinians do not generally question whether the public has the right to move freely between the wet sand and dry sand portions of our ocean beaches,” Judge Linda McGee wrote for the court.

Follow Emery P. Dalesio at http://twitter.com/emerydalesio. His work can be found at http://bigstory.ap.org/content/emery-p-dalesio.