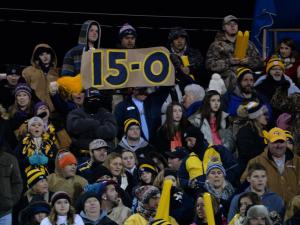 Fayetteville, N.C. — There is more at stake than just a state championship ring on Friday night at Carter-Finley Stadium in Raleigh.

When Cape Fear and Dudley meet in the N.C. High School Athletic Association 4-A state championship game, the respective mayors from the two home cities will also have something at stake.

“Fayetteville, Vander and our entire Cape Fear region are very proud of Cape Fear High School’s historic run ot the state championship game this Saturday,” Robertson said in a press release. “This friendly challenge between Mayor Vaughan and I will add a friendly wager, which is all in fun.”

Saturday will mark the first time in school history that Cape Fear has played for a football state championship. The Colts are 15-0 and defeated Scotland County on the road last week in the eastern regional championship.

“We really appreciate the support of Mayor Robertson, the Fayetteville City Council and the City of Fayetteville for our team as we play in the state championship for the first time,” said Cape Fear Principal Lee Spruill.