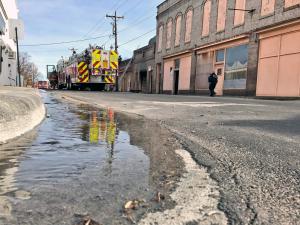 Durham, N.C. — No injuries were reported Friday morning when fire did heavy damage to a custom cabinet shop in Durham.

Fire crews were called to Garland Woodcraft Company at about 9 a.m.

More than 40 firefighters responded, and it took them about 30 minutes to bring the fire under control.

The fire started in a room where chemicals and varnishes are kept, officials said.

Employees arrived at the business at about 6 a.m. Friday.

Some nearby portions of the building sustained smoke and water damage, but fire officials were still assessing damage late Friday morning.

It’s unclear how the fire started.

Asst. Fire Chief says there are no injuries. He’s not sure a dollar estimate on the damage, but here’s what the inside looks like. @WRAL pic.twitter.com/dzwLSy6t48