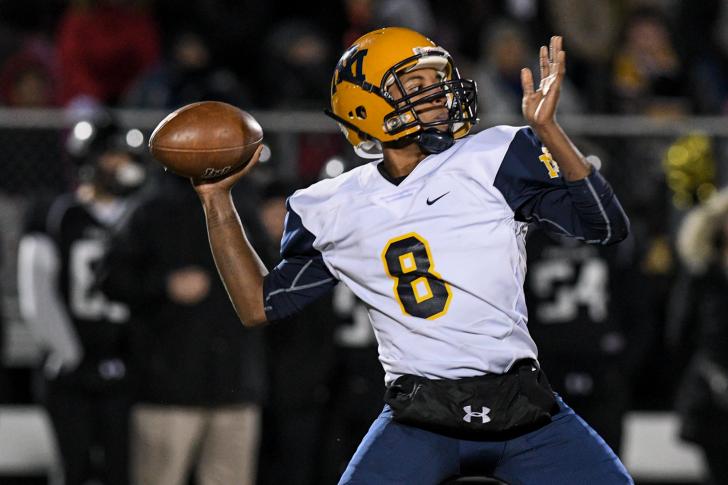 On Saturday afternoon it was the Red Raiders raising the trophy after defeating the Gryphons, 17-6, at BB&T Field in Winston-Salem to claim South Point’s first championship since the 2009 season.

“I couldn’t be more proud of the hours they’ve put in,” said South Point head coach Mickey Lineberger. “All year long we’ve been talking about being four points better, and we made it happen today. I’m very proud of these young men and the accomplishment they made.

“They gave unbelievable effort; they come every day to work hard and they really had a lot of good things going on.”

Points were certainly not a surplus Saturday afternoon in Winston-Salem as both teams combined to score 10 points in the first half.

South Point kicker Thomas Lempereur got the Red Raiders on the board with a 29-yard field goal after both teams traded turning the ball over on downs late in the first quarter.

However, the Red Raiders were unable to move the ball down the field after junior defensive back Detrell Revis picked off South Point junior quarterback Scottie Lee on South Point’s next possession.

Rocky Mount finally got on the board – and took the lead – after Lynch connected with sophomore receiver Shyheim Battle for a 25-yard touchdown pass with eight seconds remaining in the half that capped a 10-play 68-yard drive.

Lynch completed five passes for 52 yards on the scoring drive. He finished 10-of-19 for 91 yards with one touchdown and one interception.

Despite Rocky Mount taking a four-point lead into halftime, the touchdown in the waning moments were the only time the Gryphons would sniff the endzone all game.

The Red Raiders grabbed momentum away from Rocky Mount after senior Max Mead took the second-half kickoff 52 yards to the Gryphons’ 32-yard line.

South Point traveled 13 yards after the big return, which set up a 36-yard Lempereur field goal to put the Red Raiders within one point of the Gryphons.

The Red Raiders kept their foot on the gas and forced a Lynch fumble at the Rocky Mount 23-yard line on the Gryphons’ next drive.

Lee found freshman receiver Ray Grier near the corner of the front-right pylon for a 7-yard touchdown to cap a six-play drive following the Rocky Mount turnover and give the Red Raiders their first lead since the second quarter.

Lee’s touchdown pass was his only completion in the game. He finished 1-of-6 for one touchdown and one interception.

Rocky Mount held on to hope after Lempereur missed a 24-yard field goal with 8:42 left in the fourth quarter.

Gryphons head coach Jason Battle elected to keep his offense out on the field after being held to a 4th-and-17 with 6:30 remaining in the contest, but Lynch was taken down in the backfield by junior defensive line Phillip Davis at the Rocky Mount 25-yard line.

“I felt at that point in time they’d chew the clock up anyways,” Battle said. “Even though defensively we’d been getting them off the field, we had awful field position all day. At that moment I felt like that was it.”

The then six-point game was extended to a two-score game seven plays later after Lemperuer redeemed his earlier miss with a 25-yard field goal to put South Point up 16-7 with 3:06 remaining in the contest.

The Red Raiders tallied 199 of their 206 total yards on the ground. Junior fullback Jake Alexander led the South Point ground attack with 28 carries for 137 yards.

Farmer, who split time at running back and defensive back, added 65 yards on 12 carries for the Red Raiders.

South Point (12-4) won 10-straight games en route to the championship after losing four of its first four games to open the regular season. The Red Raiders outscored its competition 188-13 in postseason play.

“I thought we had a great football season; we had a great year,” Battle said. “I’m not hurt in any way, shape or form. Of course everybody wants to win, but I thought our kids played their hearts out, and we just fell short today.”