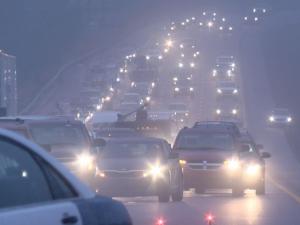 Raleigh, N.C. — Raleigh police and the North Carolina State Highway Patrol responded to more than 260 wrecks in Wake, Durham, Granville and Johnston counties between midnight and 8:30 p.m. Raleigh police responded to 203 accidents between 11 p.m. and 7 a.m. No serious injuries were reported.

Below-freezing temperatures around the Triangle were enough to freeze the light amount of precipitation that fell on bridges and overpasses. As of 7 a.m., the Raleigh Police department said it responded to 191 crashes, and Highway Patrol troopers took on 179.

No fatalities were reported.

CHECK IT OUT: Think I’m kidding about the mess on 540? See for yourself. #wral pic.twitter.com/RdT9pKFuH0

The wrecks temporarily closed or caused heavy delays on many of the major thoroughfares around Wake County, such as Interstates 40, 440 and 540. Police closed off some ramps and bridges to keep drivers off the roads most susceptible to icing.

I-540 toward the Raleigh-Durham International Airport was closed around 7 a.m., and authorities were rerouting traffic to U.S. Highway 70.

But Peggy Beach, spokeswoman for the North Carolina Department of Transportation, said crews also closed roads as far west as Interstate 77 in Charlotte.

“It’s not just the Raleigh area. It’s various places around the state that are having issues,” Beach said. “So, we do ask people to be careful. If you have to go out, take extra time and be very, very careful.”

Temperatures climbed above freezing around 10:30 a.m. to help melt away the ice.