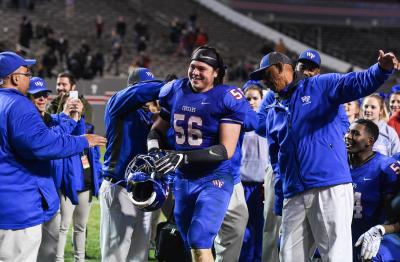 Wake Forest, N.C. — For starters, let me be clear. There was nothing surprising or exceptional about the way Wake Forest played in dismantling Greensboro Page. What Wake Forest did against the Pirates at Carter-Finley Stadium, was the exact same thing we have seen each and every Friday night since August here in Wake County.

But there I’ve said the magic words: Wake County.

We knew how terrific this Cougar football team had become. However Wake County has something of a football credibility problem in places like Charlotte and Greensboro, maybe even New Bern and Asheville. And that’s because, when it comes to 4A/4AA football championships, Wake County can only claim three – well four now, thanks to Wake Forest.

Two of those state championships won by Wake County teams precede the dates of birth of most high school football fans. Raleigh High School won the 4A title in 1961. I can tell you nothing about that one as I was in elementary school in the Midwest.

And I was still in Journalism School in 1970 when the Broughton Caps blanked Charlotte Olympic 14-0 to capture Wake County’s second football championship. From what I have read and heard through the years, that Broughton team was not heavily stocked with future college players. But those kids banded together on both sides of the ball under the legendary coach David Riggs.

Seventeen years would pass before another Wake County school would capture a state championship on the gridiron.

When it comes to telling the tales of the 1987 Garner Trojans, I can provide some first-hand accounts. The NCHSAA did not seed teams then, and so Garner, despite its perfect record, had to play most of its playoff games on the road. Jeff Gravley and I made the trip down U.S. 1 to Rockingham to cover Garner at Richmond County.

What I mainly remember about that game is two outstanding offenses. Richmond County had the great Mike Thomas, then a sophomore. His running and passing put all kinds of pressure on the Garner offense to score.

Garner trailed 24-20 with time for one final drive. Stacy Betts passed into the end zone on fourth down. Incomplete. But wait – the officials called pass interference! A very controversial call, I might add. On the next play Betts passed to Robert Hinton for the game winning touchdown, and the Garner dream season continued.

The following Friday the Trojans played Northern at Durham County Stadium. I married into a family of six graduates of Northern High School – I have seen lots of commencements and other events there – but had never seen County Stadium full. That night for Garner and Northern, County Stadium was full. 10,000 strong. We saw a very well played game by the two best teams in the Triangle. Northern would win a state title a few years later under coach Ken Browning, but that night Garner again came out on top.

Thank goodness the officials called pass interference back at Richmond County. Otherwise we would all have been deprived of some of the greatest theater in the history of North Carolina high school football.

Garner again had to hit the road, traveling to Charlotte’s Memorial Stadium where Tom Knotts’ Harding team was waiting. Knotts, of course, would later become coach at Independence. Garner coach Hal Stewart felt disrespected during the week leading up to the big game, and Stewart made sure his players arrived in the Queen City with the right mental attitude.

At WRAL-TV, we sent Jay Jennings and Jeff Gravley, arguably two of the best photographers ever to have worked a high school football sideline, to cover Garner’s quest for respect. The story these two put together was mesmerizing, as Garner star Anthony Barbour put on an absolutely virtuoso performance in a Garner 40-21 win over Harding.

What I remember even more is the look on both their faces when they returned to the station. They could barely suppress smiles as they talked about the sounds and images to be found on their video tape. First, they witnessed a great game, full of exciting plays, won of course by a Wake County team. Second, between the two of them, they got great shots of every single big play – remember these are two of the best photographers ever. And finally, they wired Hal Stewart for sound. Oh my goodness.

“We’ve been talked about like dogs all week in the paper by these city slickers,” Stewart hollered, prodding the Garner locker room.

He said more, he said much more. Truly riveting stuff.

Jay decided to intermingle Stewart’s fiery pep talk with the resultant big plays on the field – mostly touchdowns by Barbour – and he put the incredible sound and video to music – “Time of My Life” by Bill Medley and Jennifer Warnes. The result is one of the most compelling pieces on high school football I’ve ever seen.

Jay recently posted the video on the internet, with an introduction from our friend Tom Suiter. Put simply, this photo essay is must viewing to understand Wake County’s long quest for respect in football.

Garner earned that 1987 state championship. It was a victory those players and coaches, indeed the entire Garner community would savor for years.

Those ’87 Trojans are legends in Garner even today.

But while Stewart and Garner would become a perennial playoff team, there would be no more state championships, although the Trojans did reach the championship game in 1998 against Richmond County. And Stewart told me in a WRAL interview before the game, “that was not pass interference on Richmond County back in ’87.”

Knowing Hal, he might have been trying to soften the Raiders up. But Richmond won 38-6.

4A Football in North Carolina has been to a certain extent about dynasties (and we would note here the NCHSAA changed from four classifications to eight in 2002, adding a 4AA category for the biggest schools).

Greensboro Page put together quite a run in the 80’s, winning three straight state titles with players like Todd Ellis, Jeff Dunn, and Haywood Jeffires, to name a few.

Richmond County won three straight, with Mike and then Eric Thomas. The Raiders won again in ’97 and ’98 – all five of those titles won under Coach Darryl Barnes.

Then came Tom Knotts and Independence, which won more than 100 straight games and captured every title from 2000-2006.

With the creation of the 4A and 4AA classifications, we saw scattered other successes – a championship for Asheville Reynolds under Bobby Poss, who had previously won at Fayetteville Seventy-First and South View; Bob Paroli won a title at Seventy-First; New Bern won a championship, Scotland won one, Richmond again, Reynolds again,

Durham Hillside won a championship in the 4A ranks. Greenville Rose won four in a row.

But almost every 4AA title went to a team from the Queen City – Independence, or later, Butler, then Mallard Creek. There was not one championship, either 4A or 4AA, won by a team from Wake County from 1987 until Saturday.

Wake County back on top

Some may quarrel with Wake Forest’s ascendancy here in 2016 because the Cougars did not defeat a Charlotte team. But here’s the point – they throttled a team called Greensboro Page, which owns more state championship trophies than any other school this side of Independence.

The Pirates won a championship in 2011 when they defeated Garner. They played in the 4AA Championship game last year. And this season, they absolutely blasted Charlotte’s last 4AA playoff survivor, Vance, by five touchdowns.

For Wake Forest to shut out Page, which averaged 46 points per game, and make it look easy – that should get attention for Wake County football in all corners of the state.

I have only seen one defense that I can recall comparable to the 2016 Wake Forest Cougars. Whiteville, a small school in Columbus County that was rife with incredible athletic talent in the 80’s, shut out nine consecutive opponents in 1985. The Whiteville Wolfpack in those years sent three players to the NFL and two more to Major League Baseball. Their star, a once in a lifetime player named Chester McGlockton, led Whiteville to the NCHSAA 2A title in 1987, with of course, a shutout. But athletic as that Whiteville defense was, as big as Chester McGlockton was, Whiteville’s defensive front did not compare with what I have seen from Wake Forest this entire season. And I agree with those who have suggested that last year’s Wake Forest defense, led by superstar Dexter Lawrence, might not be at quite the same level as the Cougar defense in 2016, which is deeper and more experienced.

This season, Wake Forest put together its own landmark run defensively. The Cougars did not allow a single touchdown from early September until mid-October. And when rival Heritage finally became the first in more than a month to find the end zone, the Huskies needed a superb pass from a college level quarterback and a diving catch by a talented receiver.

That’s what it takes to score against this Wake Forest team.

Xach Gill and the front three are so big, athletic, and strong they can make life in the opposing backfield miserable, and do so without help from their other eight teammates. That frees Darius Hodge, his fellow linebackers, and the defensive backs to run down sweeps or pick off passes. Both of which they did Saturday.

And Wake Forest isn’t all defense. The Cougars bring dominant play on special teams. And coach Reggie Lucas’ Wing-T offense, carried over from predecessor Earl Smith, churns up big chunks of yards behind the super running of Devon Lawrence and Marquis Dunn, plus the occasional pass from Chris James. Throw in the leadership of Lucas and his staff – maybe this program, already dominant in Wake County, could become a future statewide dynasty. But that’s for another day.

The 1987 Garner Trojans were known first for their offense. This Wake Forest team will always be remembered first for its defense. But these two programs have some things in common.

What a feeling it must be in Wake Forest today after the Cougars shut out Greensboro Page. The afterglow will last for a very long time – as it has in Garner.

No doubt Coach Lucas and Wake Forest, overlooked outside of Wake County, could relate to Hal Stewart’s long ago quest for respect, “They talked about us like dogs in the paper.” After Saturday’s championship win, for Wake Forest, for Wake County, there are no more dogs. Given the fact that Wake Forest had closer games with schools like Heritage and Middle Creek than with Page, you’d have to say Wake County football has truly emerged. Maybe once and for all.

Reggie Lucas said after the big win that all of “Wake County should enjoy this.” Indeed. And for the Wake Forest program, as for Garner so many years ago, this is “the time of their lives.”

Bob Holliday has covered high school football at WRAL-TV since the 1980s and is a regular contributor to “Football Friday” each week. Follow Bob Holliday on Twitter @WRALBobHolliday.