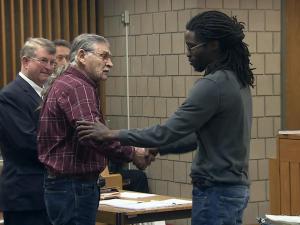 Fayetteville, N.C. — The Fayetteville man who shared a handshake and a hug with the man who punched him in the face during a Donald Trump rally is being criticized for his decision to forgive.

Rakeem Jones never expected people to respond the way they did to the video and still images of him shaking John McGraw’s hand.

McGraw, a former Golden Gloves boxer nicknamed “Quick Draw,” pleaded no contest to assault and disorderly conduct charges on Wednesday and was given a suspended 30-day jail sentence and a year on unsupervised probation for punching Jones at a March rally.

Jones said he doesn’t agree with how everything played out in the judicial system, but as for his choice to forgive, he left court that day at peace.

“I slept like a baby that day. I didn’t care. I saw my phone blowing up. I put it on ‘do not disturb’ and went to sleep,” Jones said.

Jones and McGraw had found middle ground and embraced in court. It seemed harmless and perhaps even inspiring.

“The next thing you know, my phone is blowing up like ‘you’re all over’ and I’m like ‘for what? A handshake’,” Jones recalled.

The images of the hug and handshake sparked hundreds of shares and comments on social media. Many suggested black people, such as Jones, are often too quick to turn the other cheek. They said it wasn’t just a handshake, but an elderly white man getting a pass for taking a cheap shot at a young black man during a Trump rally.

“Yesterday I decided to look up YouTube and I put my name in and I’ve seen videos where people took 20 minutes of their day just to call me all kinds of names and I’m like you don’t even know me,” Jones said.

Jones said the handshake was not planned but he does not regret it because he’s setting an example for his young son.

“He actually saw when Mr. McGraw said ‘we might have to kill him. Like, he seen it,” Jones said. “It was just the thing of, you know, being a man and letting it go. Some things you just have to let go.”

To the people who have made comments on social media suggesting Jones should have handled the encounter differently, he believes they should mind their own business.

Jones said not many people have seen the part of the video that takes place before the handshake, when he very clearly said he doesn’t agree with McGraw’s one year of unsupervised probation or the part where he asks McGraw to come and speak with him face to face, which is how the handshake happened in the first place.