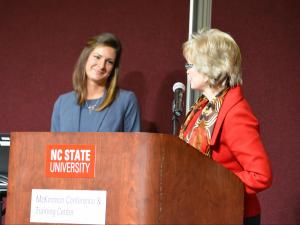 Raleigh, N.C. — Jeani Allen answered the phone. On the other end was some much-needed good news. She had won an award, one of North Carolina’s most prestigious government watchdog awards for her work as an internal auditor at the state education department.

Allen hung up the phone and sobbed.

“It was bittersweet,” she said. “I cried because I’m so grateful and I’m so glad, but the one person that I want to be proud of me isn’t here to be proud of me. So that was really hard for me.”

Last week, Allen walked across the stage at North Carolina State University’s McKimmon Center to accept her award. In the audience, more than a dozen friends and family members sat in the front row to support her.

As she spoke to the crowd, a silver necklace hung from her neck with the words “Love Justin,” shaped in the signature of her late husband who died unexpectedly in June. 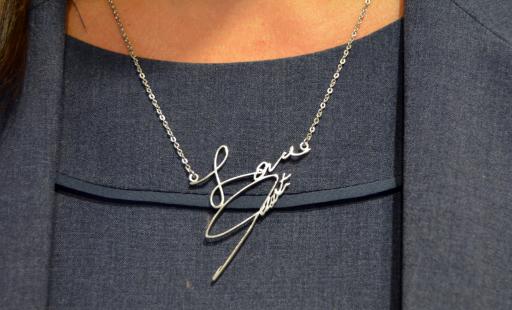 “It came from an anniversary card that Justin wrote to me,” Allen said as she sat in the lobby after the ceremony. “I like to have a piece of him on me all the time. It makes me feel better, like he’s still with me.”

The awards ceremony marked one of the few bright spots Allen has had since June as she has struggled to adjust to life without her husband of seven years.

“What I really wanted to say in there is that I’m so grateful to Justin because his work ethic has made such a big difference in my life,” she said.

Her husband, Justin Allen, worked as a plumber. While he stayed busy with his career, Jeani was leading the office of internal auditing at the North Carolina Department of Public Instruction. Their jobs kept them so busy that they rarely spoke on the phone during the day. But each morning, Justin made sure his wife got up in time for work.

“I’m always running late. It’s the story of my life. And he would go to breakfast every morning, like an old man he would go with a group,” Allen said, smiling at the memory. “He would get up at 5:30 and go eat breakfast and come back home almost every day to make sure that I was getting ready for work … Working was very important, the most important thing.” 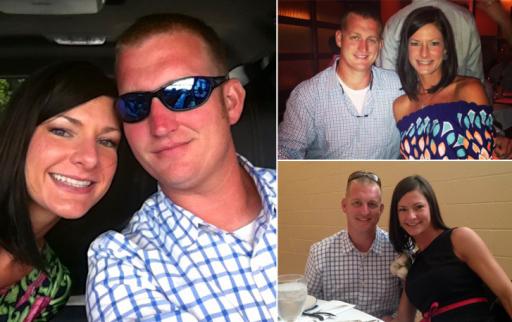 Allen’s work was taking off. In her four years leading the auditing office, she had grown it from a one-woman operation to a team of two and a half. Her office not only audited how the department handled millions of dollars in state and federal money, it also investigated allegations of financial mismanagement and abuse within the agency.

She investigated at least two allegations of employees misusing time in the past year and a half. In September 2015, she found that an employee failed to report about 41 percent of the leave they took during a two-year period, costing the state more than $11,000.

“I would say my favorite audits to do, as twisted as this may seem, are investigative audits,” Allen said. “Those things I enjoy, not because somebody’s going to get in trouble, but because management needs to know, and they need a neutral third party to help them. You know, here are the facts.”

Not all of her investigations have found wrongdoing. Sometimes her work has exonerated the wrongly accused.

In August 2015, she completed an investigation into the state’s Career and Technical Education division after an anonymous source reported improper use of state and federal resources. After interviewing employees and reviewing records, Allen determined that the allegations were unfounded.

“Whether we substantiate or unsubstantiate the allegations, to me, there is a benefit. People know the truth,” she said.

One thing that makes her job tricky is her proximity to the people she investigates. She often works in the same building and walks the same halls as the people she is charged with reviewing.

“It’s probably one of the most thankless jobs in the auditing profession,” said State Auditor Beth Wood.

Wood was on the panel that chose Allen to receive the North Carolina Internal Audit Award of Excellence at this year’s Office of the State Controller Financial Conference.

“These internal auditors are a part of the agencies in which they work. They are telling their colleagues that you can improve, you’re doing things wrong, things need to go better,” Wood said. “It is a very difficult position to be in.” 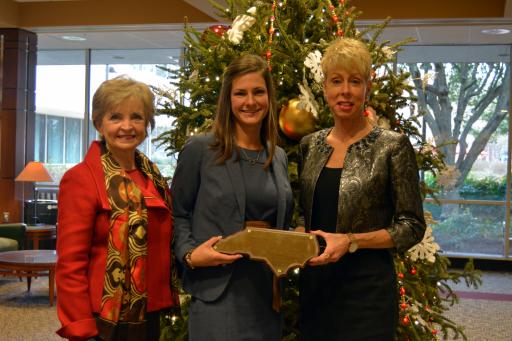 One way Allen has tried to earn the trust and respect of her co-workers is to provide what she calls technical assistance, a way for employees to come to her with questions even if they are not being audited.

“(They can say,) ‘OK, from an auditor’s perspective, when we’re setting up this program, what do you think about this?'” she said. “I think once you show your worth in other ways, besides just pointing out problems, then people start to understand that a little bit more and ask you to come to the table, and you can help more.”

Allen also studies ways to make the department more efficient and effective and sometimes shadows employees in the field to see how they document their work and so she can suggest ways to help them.

Although much of her work is focused at the education department in Raleigh, she sometimes travels for her job. This past summer, she took several trips to a school system to check on allegations of school nutrition funds being used improperly.

Her memory of those trips is tinged with sadness. Not long after she returned home, she dealt with the devastating loss of her husband.

On Sunday, June 26, Allen stopped by her mother-in-law’s house to see Justin, who was out back in the shop. She saw him lying on the ground and called out to him, but he didn’t respond. She rushed over to help him, but he was already dead.

Thomas Justin Allen was 31. An autopsy found he had an undetected heart defect, which likely killed him instantly.

At the time of her husband’s death, Allen was six and a half weeks pregnant with their first child. Her first doctor’s appointment was scheduled for the next day, Monday, June 27. Worried about the stress on her unborn child, she went to the appointment with her mom and sister.

“It was probably one of the hardest things I did,” she said.

The doctor saw the baby’s heartbeat and asked Allen to come back in a week and a half, when she would be eight weeks pregnant. When she came back, the heartbeat was gone.

She picked out a name for the baby, who was due Feb. 19, 2017 – Thomas Justin Allen, after his father. She would have called him Thomas J.

In the weeks after she lost her husband and unborn child, Allen huddled close with family. She took two and a half months off work and tried to figure out how to move forward.

“It’s been rough, but I believe God has a plan for our life, and I don’t have to like it, but I believe that He knows what’s right for us, so I just have to trust in that,” Allen said. “Justin and the baby are together, and he’s taking care of the baby.”

Sometimes, she dreams about Justin.

“I was dreaming the other night and I was telling him, ‘Gosh, if we’re going to live together in my dream like this, then I guess we could have more kids.’ He was looking off in the distance, and he looked at me and he said, ‘The hell we are, Jeani. Who do you think’s raising the one we got? You aren’t even up here to raise him,'” Allen said, smiling. “That was funny to me, but … I think that that’s all God. That gives me the peace to get up and go the next day. I feel like he’s there waiting for me, and I’ll see him again someday.”

Since she has returned to work, Allen says she has received incredible support from her co-workers, including State Superintendent June Atkinson, who has given her some of the most helpful advice.

“She has dealt with some grief in her life, and so she told me to change my pattern, to go home later or go home earlier or go in a different door when I went home, because if you change the pattern, then your brain doesn’t expect the same result,” Allen said. “And that was very helpful to me … I was grateful to her.” 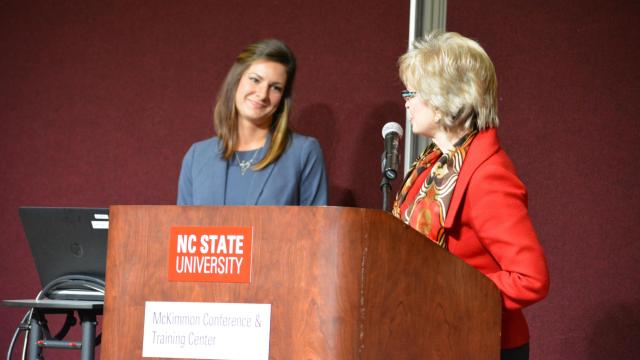 As Allen looks to the future, she plans to stay focused on her work, like Justin would have wanted. She’d like to do more investigative work and continue building her internal auditing team at the state education department. Her dream is to add a staff member with IT expertise who can help investigate computer financial fraud.

Her immediate goal, though, is just to make it through the holidays, which will be tough.

“Ever since I lost Justin, I’m kind of just taking it day by day,” she said. “But I’m sure there’s some plan for me or I wouldn’t still be here. So, I’m looking forward to seeing what the future holds.”