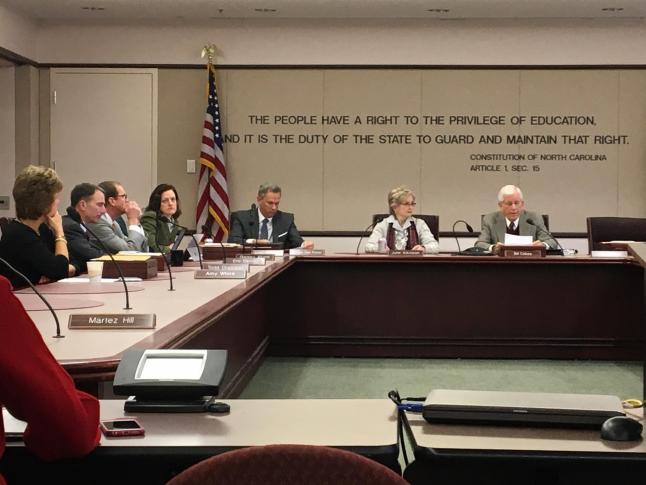 Raleigh, N.C. — The State Board of Education asked its attorneys Tuesday to continue analyzing House Bill 17, which takes away power from the board and transfers it to the new Republican State Superintendent-elect Mark Johnson, who begins the job next month.

The board opened its meeting at 10 a.m. and quickly went into closed session to discuss the bill, which outgoing Republican Gov. Pat McCrory has signed into law. The board plans to meet again before Jan. 1.

State Board Chairman Bill Cobey made some brief remarks before going into closed session and said the bill “attempts to diminish the board’s constitutional authority” and “raises significant legal concerns.”

The board declined to comment at the end of the meeting and instead released a statement from Cobey directing attorneys to “review the constitutional implications of the legislation.”

The bill, which was passed last week, gives the new superintendent more flexibility in managing the state’s education budget, more authority to dismiss senior level employees, control of the Office of Charter Schools and the ability to choose the leader of the new Achievement School District, which will oversee some of the lowest-performing schools in the state.

Those powers are currently under the State Board of Education’s control.

The state board’s chairman and vice chairman, both Republicans, oppose the bill.

“We have had a strong and productive working relationship (with the current state superintendent),” Cobey said. “We would like to see this continue in the future.”

Johnson released a statement Friday, saying the bill “will help usher in an era of greater transparency at (the Department of Public Instruction) by eliminating the more confusing aspects of the relationship between the N.C. superintendent and the N.C. Board of Education.”

“This will better serve constituents visiting Raleigh as our working relationship will be more similar to how local superintendents and their respective boards of education work together across North Carolina,” his statement continued. “I thank the N.C. House and N.C. Senate for their hard work on these straight-forward, common-sense reforms.”

Sen. Chad Barefoot, R-Wake, said lawmakers created the bill to clarify the constitutional role of the superintendent. “I can tell you from personal experience that the superintendent needs more administrative control over his department.”

Sen. Terry Van Duyn, D-Buncombe, said the level of political influence Republicans are trying to assume over DPI “quite frankly scares me and should scare anyone who cares about public education.”

“We are interested in seeing how this plays out,” she said. “It’s been a long time since we’ve seen a significant change” in the roles of the state board and superintendent. ​