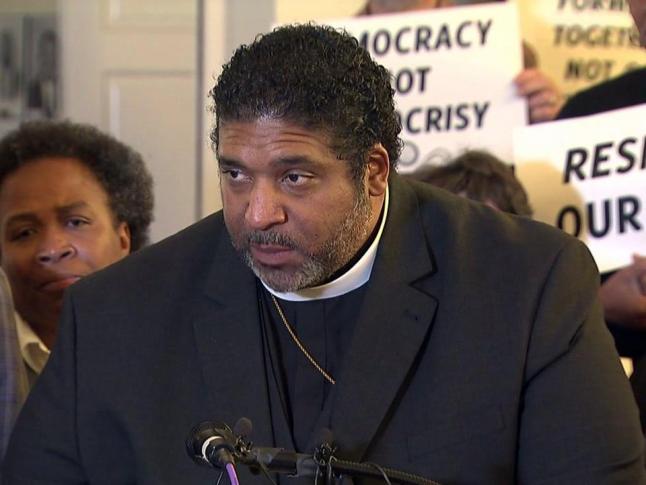 Raleigh, N.C. — The executive committee of the state NAACP will ask the national leaders of the civil rights group for a nationwide economic boycott of North Carolina to protest the actions of the General Assembly, state NAACP President Rev. William Barber said Thursday.

Barber said the state NAACP takes issue with more than the legislature’s failure Wednesday to repeal House Bill 2, which he called “an anti-worker, anti-civil rights, anti-LGBT bill” because it prevents cities and counties from raising the minimum wage or enacting anti-discrimination protections. That was merely the final straw, he said, noting Republican lawmakers last week stripped incoming Democratic Gov. Roy Cooper of various powers and set up partisan elections for the state’s highest court.

“They’re cheating to hold on to power,” he said. “Enough is enough.”

North Carolina voters elected Cooper with the idea that he would be able to exercise certain powers, Barber said. By limiting those powers, lawmakers are infringing on voters’ rights, he said.

The NAACP staged a national boycott of South Carolina for 15 years until the state removed the Confederate flag from its statehouse grounds last year. During that time, the NCAA and other groups honored the boycott by refusing to hold events in the state.

The NCAA and the Atlantic Coast Conference have already pulled more than a dozen athletic tournaments out of North Carolina because of House Bill 2. The state law also have prompted organizations to cancel conventions, entertainers to drop tour dates in the state and some businesses to scrap plans to expand operations here.

NAACP lawyers also are reviewing recent legislation for possible court challenges, and the organization is planning a major march downtown dedicated to “resisting our legislature and its continuing constitutional overreach,” Barber said.