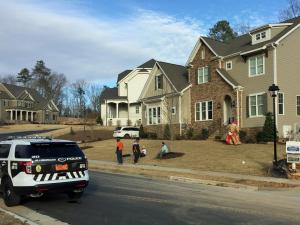 Greg Tuttle, who lives in the neighborhood, said first responders told him that a construction worker left a dump truck unattended at the top of a hill on Dogwood Bloom Lane in the Forest Ridge subdivision. That worker, Alejandro Suarez, told first responders that he had set the brake on the truck only to see it rolling free.

Hillsborough police determined that Suarez, of 287 Spider Lily Lane in Angier, was responsible for controlling the truck, and they charged him Monday with misdemeanor death by motor vehicle.

Suarez was being held Monday evening in Orange County Jail under a $10,000 secured bond.

“At this point, we don’t believe the vehicle was properly secured,” Hampton said. “We will also be following up the investigation, looking at the mechanical condition of the vehicle and confirming all of the working relationships, regarding specifically which company the crew was working for.”

The truck rolled down the hill for about 100 yards, snapping overhead power lines before running into the home and hitting they boy, who was playing in a driveway.

The child was taken to Duke University Hospital and later died, Hampton said.