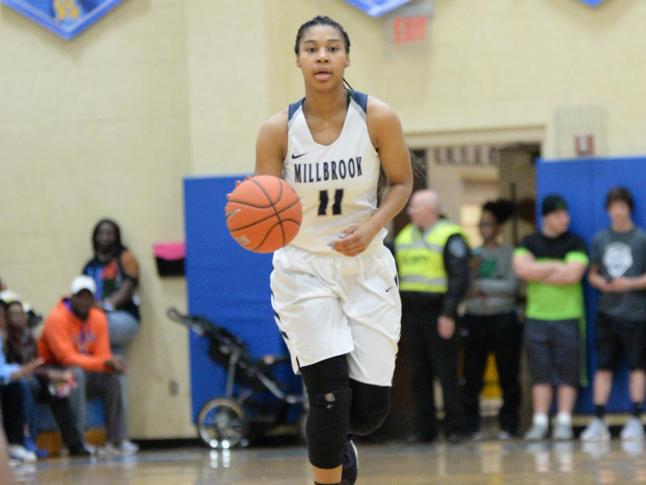 The Wildcats will move on to face CAP-8 rival Heritage in the Holiday Invitational championship game.

Millbrook head coach Chris East said he relishes the chance to face off against Heritage, due to the rivalry between to two teams and the opportunity to coach against Huskies’ head coach Pat Kennedy.

“Pat Kennedy does a great job with Heritage; they have a very solid team, I think one of the best teams in the state,” East said. “I look always forward to playing Pat, because I always see something new or something different. It helps me as a coach, and I think it helps our team, too.”

Millbrook and Northwood Temple played a close first quarter Tuesday night, but the Wildcats came alive with a 14-5 run to separate themselves from the Eagles.

Despite the second-consecutive game defeating their opponents by at least 20 points, Millbrook head coach Chris East says he’s still looking for consistent play from his squad.

“We hang our hat on defensive intensity; we didn’t have it tonight,” East said. “There were spurts of it, but it was better than last night. We talked about consistency after the game, and it’s something we need to do on a more consistent basis.”

An aspect of the Wildcats’ game that was consistent throughout the contest was finding ways to attack the basket and score in the paint with Bass and score effectively with their transition offense.

Bass, who scored 17 of her 24 points in the second half, grabbed 11 rebounds in the contest for her second double-double in as many games.

“We got on her a bit at halftime and she played much better in the second half,” East said. “She’s one of the most athletic girls – I think – in the state. Her motor – kind of like Dazia’s motor – these kids just want to win. When you have that, coaching is a little easier; I’m not going to lie to you.”

Northwood Temple Academy was led by Kendal Moore Tuesday night, who led all scorers with 26 points. Moore scored 20 points in the final two frames and tallied six three-point baskets in the contest.

The Lady Huskies, playing in their first Holiday Invitational, will advance to face the winner of Millbrook and Northwood Temple Academy.

“We’re very excited; the first time playing in this tournament and making it to the championship game,” said Heritage head coach Pat Kennedy. “Green Hope is a great team. We know they were without their top point guard, but the rest of them scrapped really hard.”

Green Hope held a four-point halftime lead over the Huskies, but Heritage outscored the Lady Falcons, 31-24, in the second half to punch its ticket to the championship game.

“I thought at the beginning, they did a great job of breaking our pressure,” Kennedy said. “When we fell back into our half court man-to-man and settled in a little bit, I thought that really helped us out; they had a little bit more difficult time scoring at that time.”

Cydney Johnson led the Huskies and all scorers with 17 points, and Alissa Smalls also finished in double figures with 11 points, along with seven steals.

For Green Hope, Rachel Argabright led the way with 16 points, and Nia Washington added 11 for the Falcons.