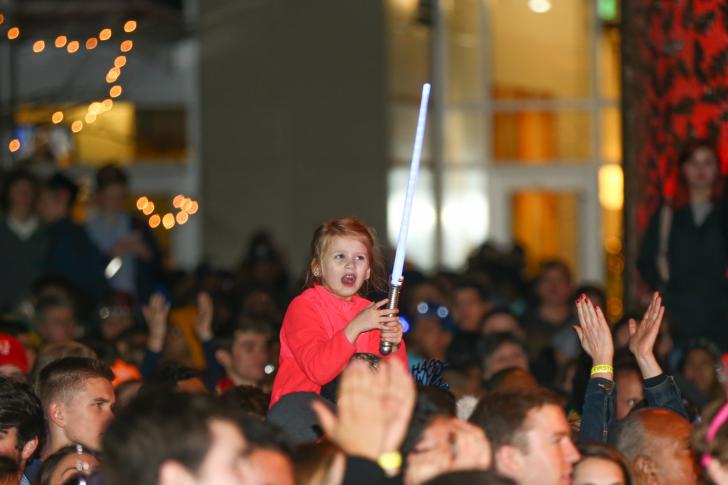 For years, First Night Raleigh’s Children’s Celebration has taken over downtown state museums and outdoor areas for family friendly fun on the afternoon of New Year’s Eve with everything from crafts and performances to games of Twister using acorns.

But, this year, First Night’s organizers are shaking things up a bit. The day’s events still begin at 2 p.m. inside and outside the N.C. Museum of Natural Sciences and the N.C. Museum of History. There will still be crafts and games and performances for young children.

But there’s a new name: The DIY Festival. And there’s a new goal: To offer activities for all ages – from young children to teens and adults.

“What we decided was that we really wanted, in the afternoon, to offer some things that will appeal to all ages,” said Terri Dollar, the long-time event organizer. “What we were finding at the Children’s Celebration was that people really love to bring really small children. But teenagers, they weren’t finding anything for them to do.”

With dozens of events and venues, First Night has always been a kind of “do-it-yourself” event, Dollar said. Visitors buy tickets, which allow them entry into any of the performances, activities and rides.

“We thought we would really take it to the next level,” she said.

The DIY Festival runs 2 p.m. to 6 p.m., Saturday, Dec. 31, in downtown Raleigh. Capitalizing on the wave of interest in crafts and do-it-yourself projects, the festival will feature not just arts, crafts and performances, but how those artists, crafters and performers do their work.

For instance, a nail artist will teach the tricks of her trade. Older teens and adults can attempt to replicate her work. Younger kids will be able to, for instance, put stickers on their nails.

Some stations such as the nail art area will feature opportunities for all ages. Others might be better for younger kids or older teens and adults. But, all together, there will be plenty to keep visitors of all ages entertained and busy.

“Even the performers in the afternoon, a portion of their performances are going to be talking about how they did it themselves, how they create,” Dollar said.

They include a 3:30 p.m., guitar demonstration by Presley Barker, an award-winning 11-year-old bluegrass musician, at the N.C. Museum of History.

“It really won’t just appeal to little kids,” Dollar said. “There’s a lot for little kids, but we wanted to try to attract people who are coming with older folks.”

The DIY Festival ends at 6 p.m. with the People’s Procession, which takes people from the museum area to City Plaza on Fayetteville Street for the early 7 p.m. countdown, acorn drop and fireworks. In between the early countdown and the official one at midnight, there are all sorts of performances and activities.

And som tips if you’re going with kids:

“Planning is key,” Dollar said. “Don’t just show up. Plan what you want to do. Then you won’t be disappointed.”