The Federal Reserve Bank of New York has released data that creates opportunity for lenders but seems to tee up consumers with problem credit for failure.

Auto loans have been moving briskly with subprime loans of people with credit scores less than 620 being granted more often. Lenders are willing to take on the risk of extending credit to people who had less access to auto loans between 2008-2011.

If you are looking to get a car loan and have bad credit that can feel like a good thing. But what borrower certainly don’t know is delinquency rates and loan failures for the same group of borrowers have been accelerating. 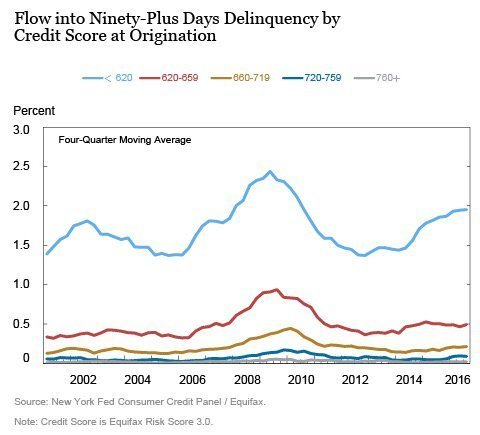 In technical speak the Federal Reserve Bank said, “The data suggest some notable deterioration in the performance of subprime auto loans. This translates into a large number of households, with roughly six million individuals at least ninety days late on their auto loan payments. Even though the balances of subprime loans are somewhat smaller on average, the increased level of distress associated with subprime loan delinquencies is of significant concern, and likely to have ongoing consequences for affected households.” – Source

The Federal Reserve Bank sees what is happening but most consumers will jump at the chance for subprime auto financing even though the data shows more and more people will default and probably lose their vehicles through repossession.

This cycle of lenders taking higher risks is a cyclical event. As the economy improves lenders tend to move into issuing more loans that are of higher risk so they can maximize revenue with higher rates. Rather than something new, this is just business as usual.

Look at the volume of subprime loans being issued. Follow the light blue line below. 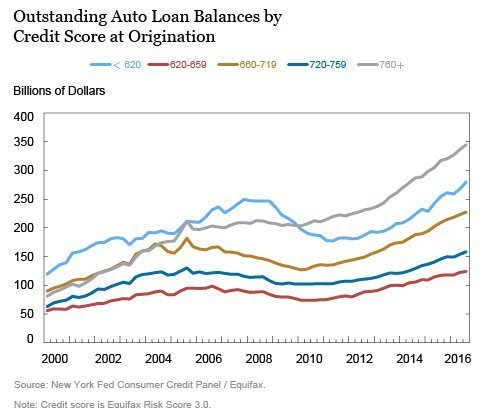 If you have a credit or debt question you’d like to ask just use the online form. I’m happy to help you totally for free.