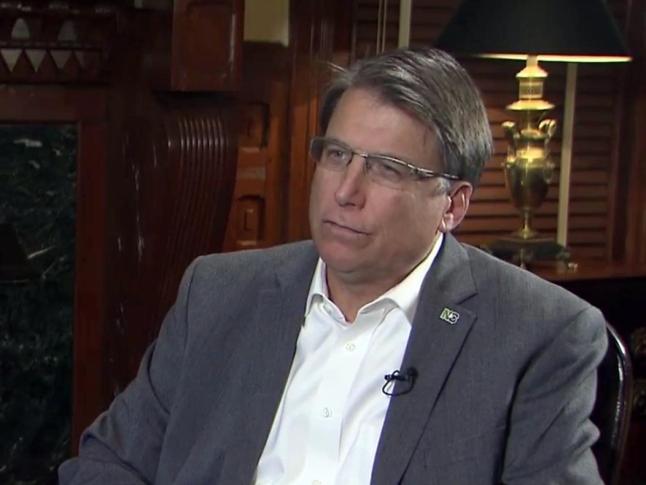 By David Crabtree and Matthew Burns

“It’s been a four-year battle against radical, left-wing groups,” McCrory said in a half-hour interview with WRAL News three days before he leaves office. “There was a coordinated approach to tar me, to stain me, and it never stopped.”

While saying he has few regrets from his four years as governor – “A do-over means you assume you’d have different results,” he said – he said he does wish he had pressed the Charlotte City Council more early this year not to pass a nondiscrimination ordinance that required businesses in the city to allow transgender individuals to use public bathrooms that correspond with their gender identity.

Media became “infatuated” with the gender identity issue, McCrory said, and the Human Rights Campaign, a national LGBT advocacy group, fanned the flames of the controversy.

“They were going to make North Carolina the epicenter of an issue none of us had ever heard of before, and it’s a sad commentary that that epicenter continues to remain,” he said.

“I think our country ought to protect people from being discriminated against based on sexual orientation, but I also think our national ought to have clear rules on how we define gender – boy and girl,” he said. “I think that’s the middle ground.”

McCrory called lawmakers back to Raleigh last week to repeal House Bill 2 after the Charlotte City Council rescinded its local ordinance, but the effort failed amid frustration and recriminations on both sides of the issue.

“I was going through deja vu,” he said, noting he was unsuccessful three times this year trying to broker similar deals. “There’s a lot of people on the left that want this issue to keep going. There’s a lot of money being raised on it.”

Even with House Bill as part of his legacy, the governor said his administration has a laundry list of accomplishments to point to with pride, from cutting taxes to raising teacher pay to building a reserve fund that will help meet emergency needs in the future.

“We’re leaving the state in much better shape that when we arrived,” he said. “We inherited an economy and a government that was totally broken, that was full of corruption, and we fixed it. We accomplished more in these four years than, I think, any administration has in the last 25 years.”

Since conceding the race three weeks ago, McCrory said, he hasn’t had time to decide his next career step, although it’s been widely speculated that he will land a job in President-elect Donald Trump’s administration. He said he’s had “wonderful talks” with Trump and counts Vice President-elect Mike Pence as a close friend, but he wants to sit down with his wife, Ann, to discuss their future.

“I have to make sure I feel comfortable in what I want to do next regarding public service,” McCrory said, refusing to rule out another political campaign or a return to the private sector. “I just want to fulfill my potential and make a positive difference.”

Remaining in politics has its drawbacks, he acknowledged, saying political rhetoric and vitriolic actions by advocates across the spectrum has become increasingly difficult to accept. He recounted how a man approached him as he left a church baptism, made an obscene gesture and spewed a string of expletives at him.

“The coarseness of the dialogue form the outside, I’ve noticed, has gotten much tougher. It gets to me,” he said. “The people who speak of wanting tolerance, I find, tend to be the least tolerant people there are.”