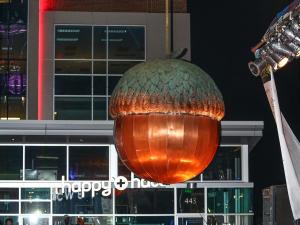 The countdown is (almost) on.

On Saturday night, like the last night of every year, the City of Oaks will ring in the new year with its Acorn Drop. But the drop isn’t the only part of Raleigh’s New Year’s Eve celebrations.

The city’s First Night Raleigh festival begins at 2 p.m. and will host nearly 100 performances, workshops and events to help usher in 2017. Admission to the party is just $10 in advance.

Attendees can play mini golf in the afternoon before checking out one of the many musical and visual performances scattered around more than 20 blocks of downtown Raleigh. {{a href=”external_link-1}}Birds of Avalon, a band that calls Raleigh home{{/a}}, will headline the main stage leading up to the midnight countdown.

The Fantastical First Night Ferris Wheel returns to Fayetteville Street and will be joined by the debut of “The Sea Ray”, a giant, swinging pirate ship that will sail the seas of Fayetteville Street. Both amusements will open to the public at 2 p.m. on the afternoon of Dec. 31.

WRAL is a proud sponsor of First Night Raleigh. WRAL’s Kathryn Brown and Ken Smith will anchor the news live from Fayetteville Street as Lynda Loveland and Gerald Owens will help provide coverage during the expanded, hour-long 10 p.m. newscast on Fox 50 and an expanded 11 p.m. newscast on WRAL-TV.