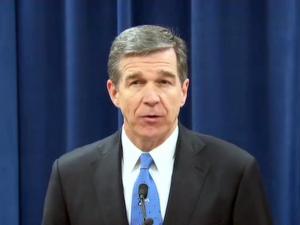 Raleigh, N.C. — Roy Cooper was sworn in shortly after midnight Sunday as North Carolina’s 75th governor, taking the reins of a deeply divided state and facing an openly hostile legislature as he tries to accomplish an agenda calling for improved schools and a stronger economy for middle-class families.

The 59-year-old Democrat, who served four terms as attorney general, won the governor’s race by the narrowest margin in modern state history, topping Republican Gov. Pat McCrory by slightly more than 10,000 votes out of more than 4.7 million votes cast. The contest wasn’t settled until early December, leaving Cooper with the shortest transition time in decades.

Getting his administration in place will be his first major challenge, and the Republican-led General Assembly has made that more difficult by passing a law requiring Senate confirmation of his nominees to lead state agencies such as Health and Human Services, Public Safety and Transportation.

Cooper’s working relationship with the legislature, where the GOP holds veto-proof majorities in both the House and the Senate, has gotten off to a rocky start. In addition to putting Cooper’s cabinet through Senate vetting, lawmakers slashed his political appointments by two-thirds and took away his power to appoint members of state and county elections boards.

He has challenged the constitutionality of that last law in court, and his attorneys said more such challenges are likely to follow.

Tensions rose even higher during Christmas week, when Cooper and legislative leaders clashed over a failed effort to repeal House Bill 2, the law limiting LGBT rights that has cost the state hundreds of millions of dollars from lost business expansions, conventions, athletic events and concerts.

Cooper blamed Senate President Pro Tem Phil Berger for reneging on a deal, while Berger, R-Rockingham, accused Cooper of sabotaging a GOP-authored compromise for his own political gain.

The legislature returns to Raleigh for its 2017 session in less than two weeks, giving Cooper little time to work on mending fences after December’s meltdown.

The formal inauguration for Cooper, a Nash County native and former state lawmaker, and the other members of the Council of State will be next Saturday.