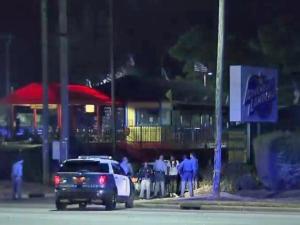 Raleigh, N.C. — One person is recovering from non-life-threatening injuries on Sunday after an overnight shooting that occurred at the Adventure Landing entertainment complex in Raleigh.

Officials said one victim was shot and transported to Wake Med, but he or she is expected to recover from their injuries.

Police temporarily shut down a portion of Capital Boulevard between Old Buffalo Road and Mayflower Drive after the shooting.