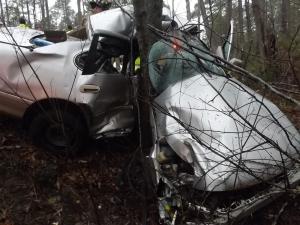 Moore County, N.C. — One person died and another was seriously injured on New Year’s Day when a car ran off the roadway and struck a tree.

Around 7:30 a.m., a Honda Accord ran off N.C. Highway 690 at the Moore County and Cumberland County line. Two victims were pinned in the car until rescue workers could remove them, officials said.

According to authorities, one of the victims died in the wreck. The other was flown by helicopter to a local hospital.

The incident is under investigation. The names of the victims have not been released.