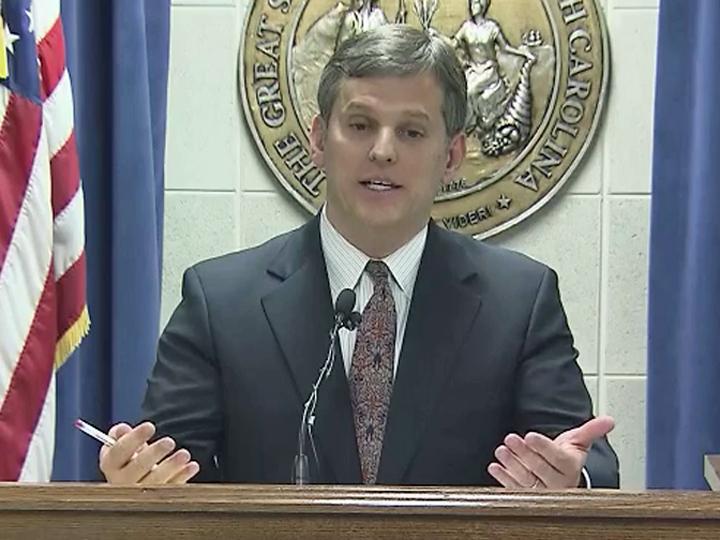 Raleigh, N.C. — As people around the world rang in 2017 with celebrations, two of North Carolina’s highest-profile leaders took their oaths of office.

North Carolina’s 75th governor, Roy Cooper, wasted no time and was sworn in just minutes after midnight. At noon Sunday, Josh Stein, the new attorney general, placed his hand on the Bible, vowing to protect North Carolinians with the power of the law.

Just after the acorn dropped in Raleigh, Cooper quietly began what he called his “solemn duty” to the state he loves. After a year of run-ins with the legislature, namely over his disdain for House Bill 2, he offered a cup of kindness.

“That other leaders in this state and I can work together to make North Carolina it’s very best,” he said.

“This is the most dressed up I’ve been on New Year’s Day, so thank you very much,” said Secretary of State Elaine Marshall.

Marshall presided over the swearing-in of Stein to the post Cooper just vacated.

Stein, a Harvard educated father of three who served as a senator from Raleigh for eight years, is, like Cooper, a Democrat and does not support House Bill 2 and some other actions of the Republican-controlled legislature.

“I’m not going to paper things over. There are going to be times when we see the world, we see policy, we see the law differently, but I think, as long as we approach those differences with mutual respect, we can serve the people well,” Stein said.

Stein has his own to-do list, and at the top, he said, is attacking what he calls the state’s opioid painkiller epidemic and stamping out Medicaid fraud.

The public inauguration ceremony for Cooper, Stein and the other members of the Council of State takes place on Saturday and the General Assembly’s long session begins Jan. 11.