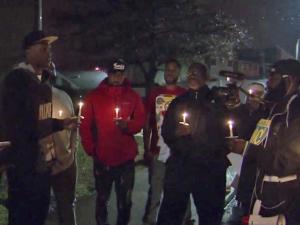 Durham, N.C. — A Durham group began the New Year pushing a message of peace with the first ever Week of Peace in the city.

The names read aloud Sunday evening may not sound familiar, but every one of them mattered and so Bull City United hopes to shine a light on what has become an all too common problem- gun violence.

“It’s like, enough is enough. We’ve got to do something about it. We can’t just lay down and accept what’s going on,” said Ky Riley with Bull City United.

Bull City United is a violence prevention initiative housed in the Durham County Department of Public Health and funded by Durham County.

Riley is an outreach officer for the group as well as a former gang member who spent nearly 20 years in prison. He and many other members in the group grew up in some of Durham’s most violent neighborhoods.

“What we’re hoping to do is use our past to influence guys because we have the credibility to do that, to adopt a new mindset,” Riley said.

Durham Mayor Bill Bell was in the crowd Sunday evening to show his support and calls the engagement crucial.

“I think people can look at them and see how they’ve made it and they can make it also,” Bell said. “We’re all in this together and I’ve said over and over again, it’s really going to take the community to make sure some of this will happen.”

Pastor Nathaniel Fuller told the crowd that it doesn’t matter how many names he reads because one name is too many. He told the group to choose peace in the New Year.

The Week of Peace will continue through Jan. 7 with candlelight vigils and ceremonies in neighborhoods where gun violence is most prevalent. Organizers said that putting an end to gun violence will be a full-time outreach effort connecting people in the communities with resources.