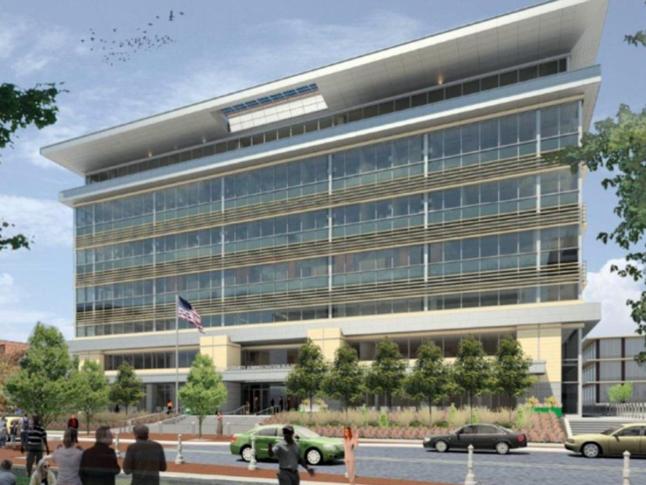 Durham, N.C. — A $47 million overhaul of Durham County’s former courthouse could bring new life to a section of downtown.

The seven-floor Judicial Building on East Main Street between Church and Roxboro streets has been vacant since 2013. In recent weeks, workers have peeled off the outside of the structure and gutted the interior.

When the project is finished by the summer of 2018, the building will feature a glass facade and streetscaping to make it more pedestrian friendly.

“We are spending more money than we planned, but we really think it will help to transform that block of East Main Street,” Durham County Commissioner Ellen Reckhow said. “We’ve become very institutional along East Main, starting at that block and moving east.”

By comparison, West Main Street is a vibrant collection of restaurants and retail shops.

Olivia Bouffard works on East Main Street but says she usually finds herself a few blocks to the west.

“There’s not a lot of shopping or restaurants,” Bouffard said of the area near her office. “I just know I don’t spend a lot of time in this part. I have to walk down to West Main Street.”

Plans call for a plaza in front of what will be renamed the Durham County Administration Building and for leasing out some ground-floor space to retailers and restaurateurs.

People attending Board of Commissioners meetings at the historic courthouse across the street sometimes feel uncomfortable at night due to a lack of activity in the area, she said.

“We’re all excited at the office about possible new businesses coming in, restaurants,” Bouffard said. “Whatever’s going to be there, I think it’ll be a great addition to downtown Durham.”

Officials also plan to move Durham County’s tax, deeds, EMS and other offices to the new building to free up space at the historic courthouse. The new building also will house a television studio and a fitness center for county employees.